Leaves are turning (and falling) and the first frost has already hit….winter is right around the corner – seriously, it’s happening. Many wildlife species have been out and about ramping up their fat and food stores getting ready for the change in season to  - oh the dreaded “S” word – snow and for others, it’s business as usual. 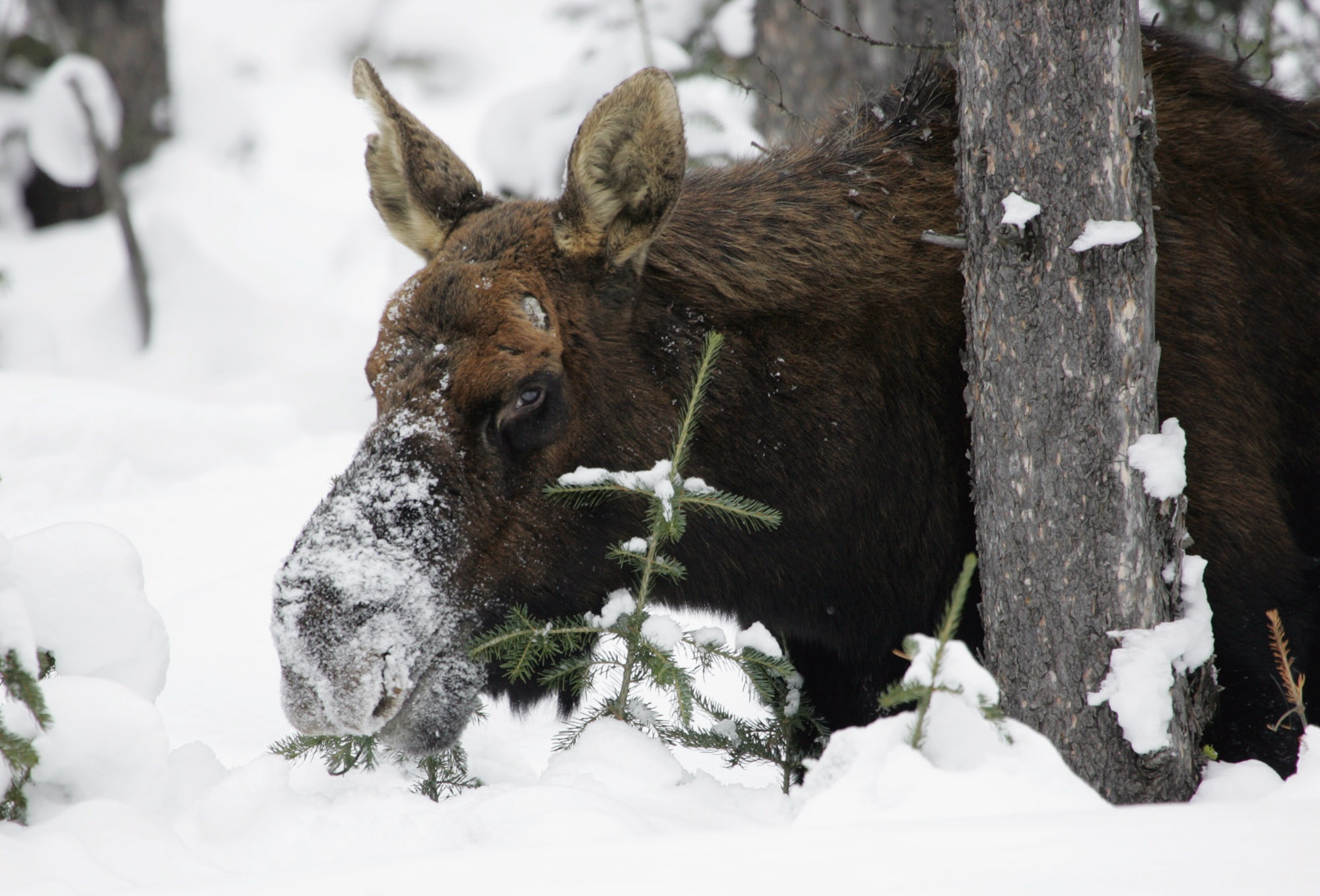 Wildlife species get ready for low resource seasons (aka winter in this region) in several different ways, some hit the road and head south – the term snowbird came from somewhere, some sleep their way through it, and for some it's business as usual. Winged species like many songbirds, waterfowl, some bat species and monarch butterflies (who have a head start of course) begin their flight south at different times, from late summer right through September each year. So what about the rest? How do they make it through NYS winter? Let's break it down by who does what.

Some wildlife winter preppers start collecting food to cache in the fall because they don’t hibernate the entire winter season – they sort of nap through it – a torpor. You probably have a good idea of who the usual suspects are - squirrels, mice and chipmunks - and they fatten up in the fall while out collecting seeds, nuts and berries to stash little stores around their dens or burrows. They need these stores because they only partially hibernate in the winter. They do sleep a lot, but they are out and about eating from their many caches of food during the winter. 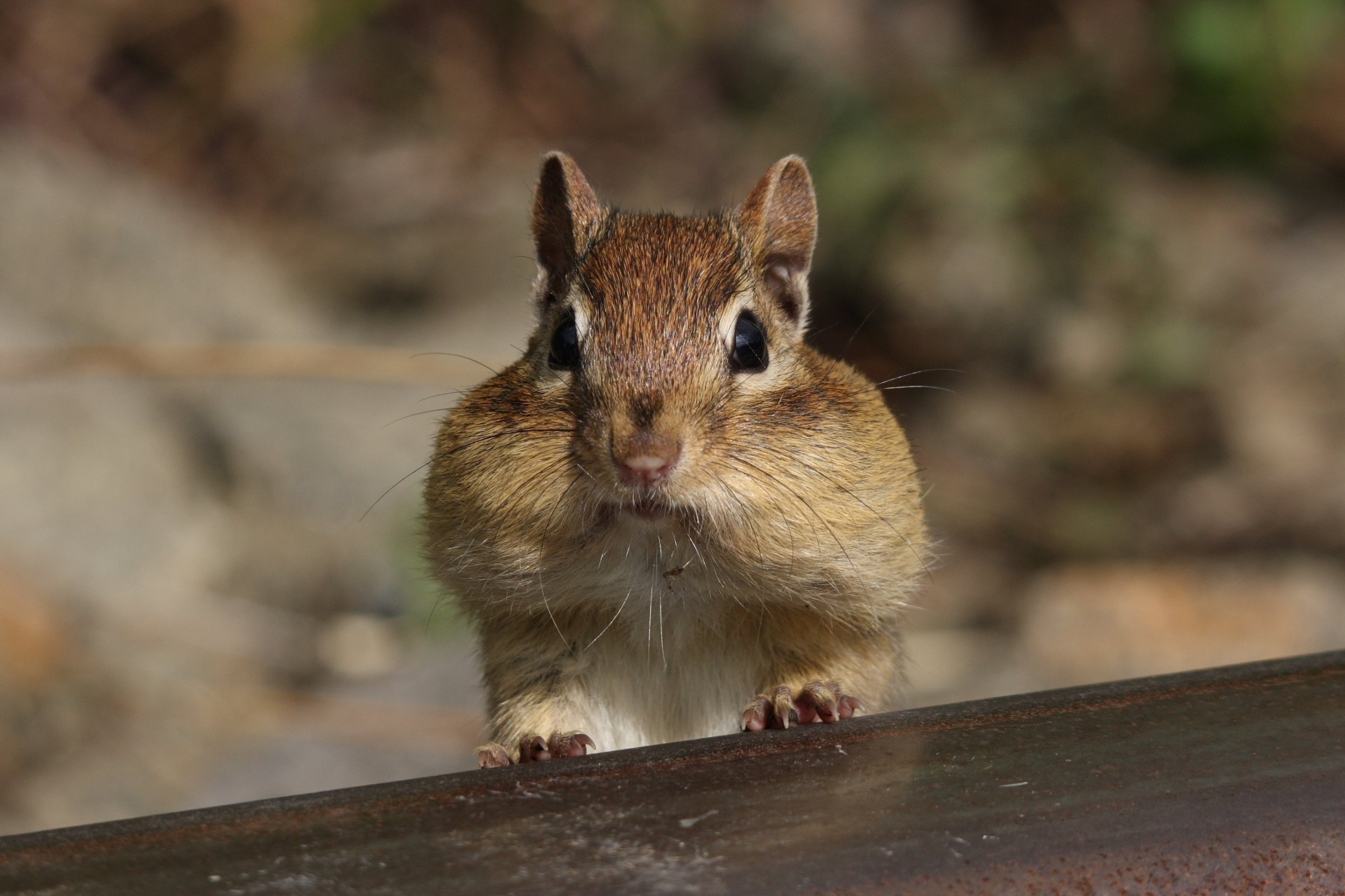 An Eastern chipmunk out winter prepping by the mouthful!

Then there are moles and shrews, no rest, um hibernation, for the wicked – these guys stockpile live animals such as earthworms, insects and snails inside their underground tunnels to feast on throughout the winter by using small amounts of venom to paralyze (and sometimes re-paralyze) their prey so they stay “fresh” aka alive, until they need to be eaten!

Black bears and bats are the most well known for hibernating, but they are not in some deep unwakeable sleep like from your Saturday cartoons. A black bear will wake up if disturbed during hibernation. So what is hibernation? It’s really a state of inactivity, including metabolic activity reduction. An animal’s key functions change - their breathing and heart rate slows and their metabolic functions are suppressed, and in most cases, enter a state of torpor where their body temperature (along with metabolism) will decrease in an effort to match the outside temperature. This helps them survive when resources are low or unavailable, particularly in the winter.

Key “sleepers” in NYS that hibernate include black bears, some native bat species, groundhogs (woodchucks), woolly bear caterpillars (we’ll circle back to this guy), and some rodent species, like the meadow jumping mouse. This is the time of year when these species, like black bears, are trying to increase their fat stores and more likely to be seen roaming about. Black bears are also far more likely to hit up sunflower seed filled bird feeders this time of year, as it is an easy fat-filled meal for them. Please hold off filling your feeders until later in winter to help prevent any bear-human-domestic animal conflicts! 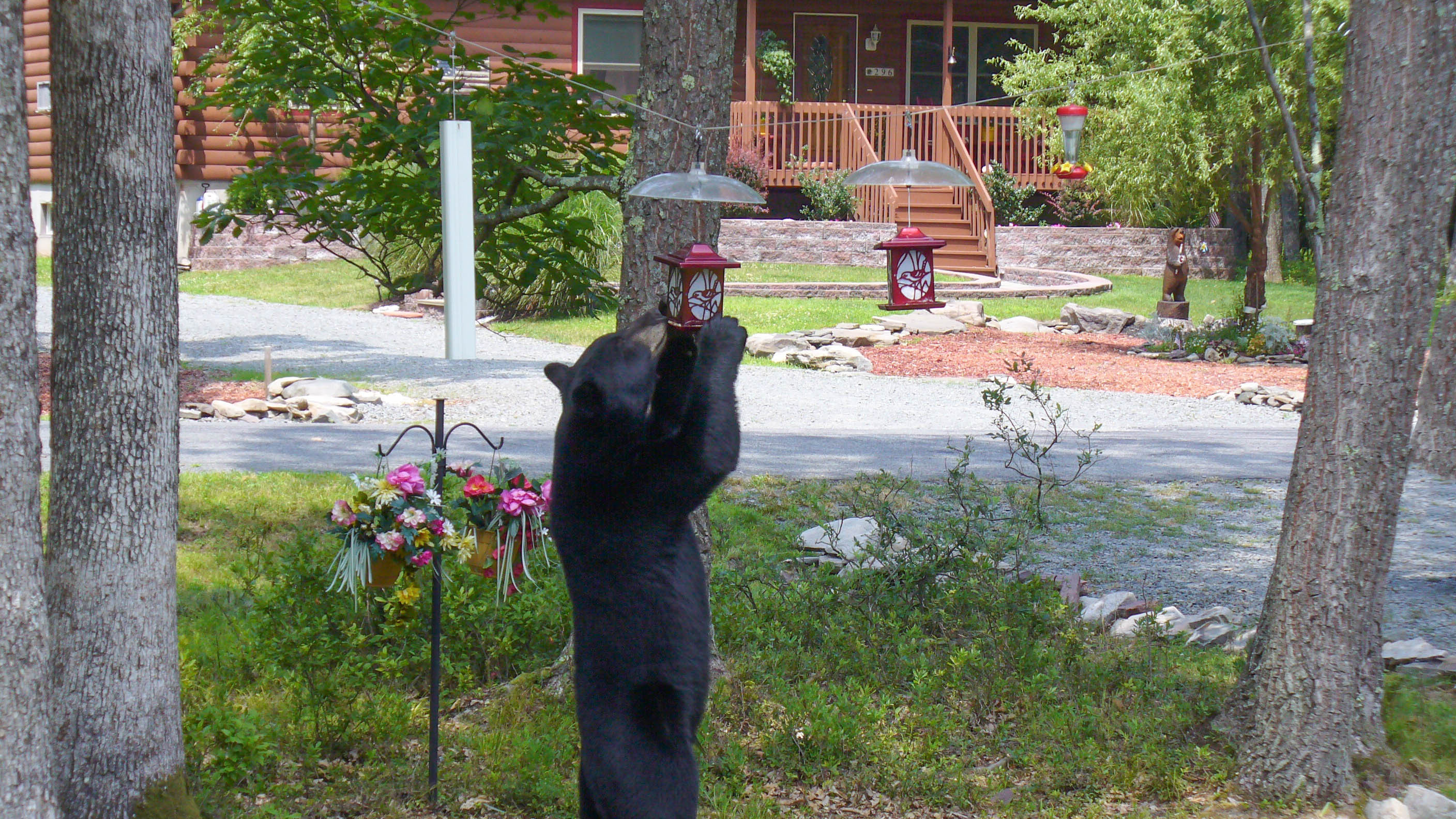 Is this for me? Thanks!

October is usually the time of year when bats begin the hibernating process, which means they are working hard to fatten up prior to starting torpor and by January they are in full hibernation mode until late April. Hibernaculum (bat hibernation sites-usually caves) should not be entered or disturbed particularly during these months. In some states like NY, particularly in regards to endangered bat species, it is illegal to enter! Disturbing bats during hibernation can cause them to waken and deplete their fat reserves and can cause starvation death. In the same way, White-Nose Syndrome (WNS, a serious fungal disease affecting bats) has been reducing little brown bat populations to near extinction levels in the state by causing these insectivorous bats to wake from hibernation when there is no food supply for them. 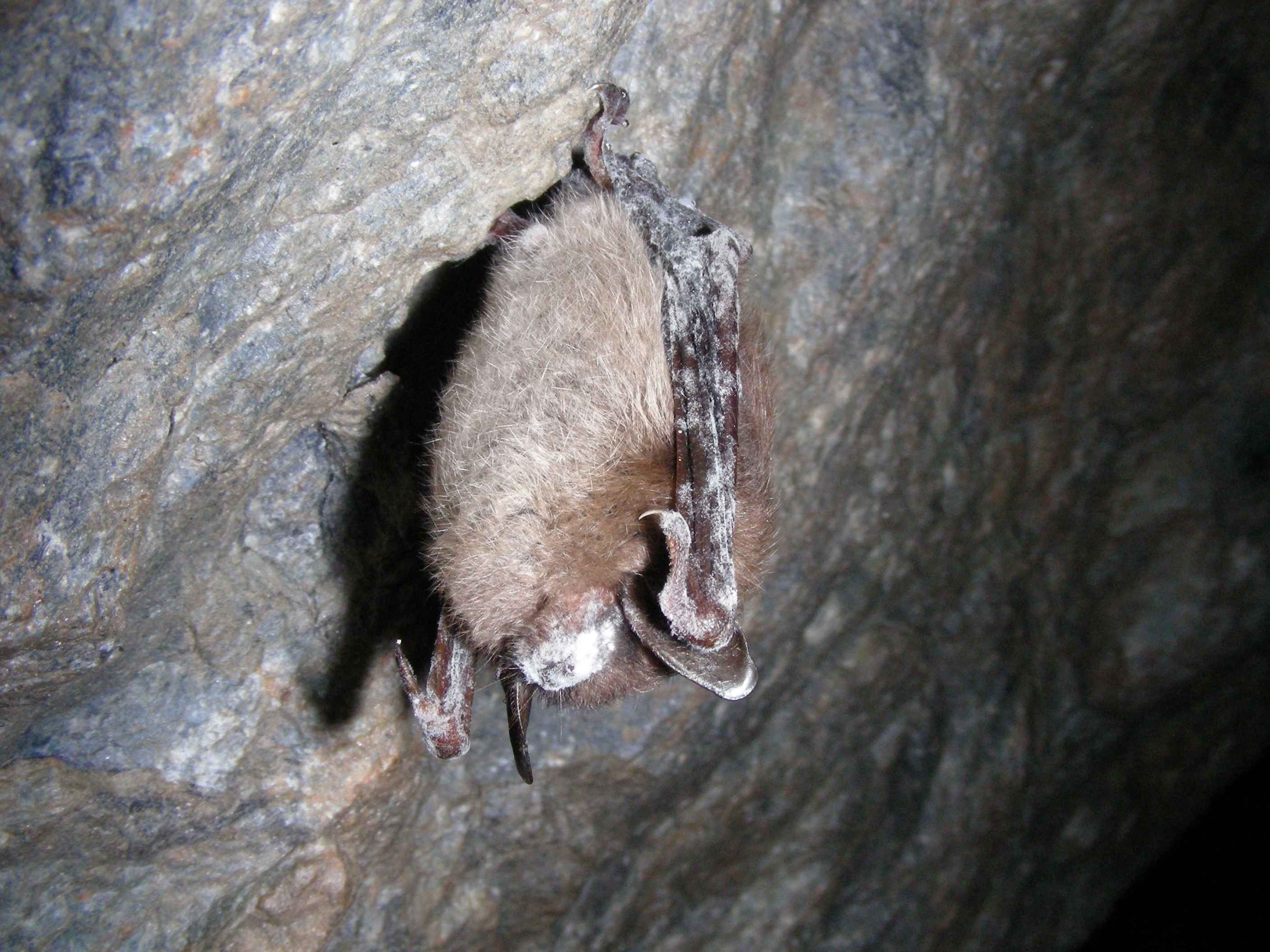 So who doesn’t let the winter season get them down? Loads of wildlife species have adapted to NYS winters. We see many species in the snow, from white-tailed deer, red fox, moose and cottontails to opossums, raccoons and the beloved chickadees are still out making the rounds. Skunks – it depends, they are light sleepers and can go into torpor based on resource availability.

So who aren’t you seeing much of and are they hibernating too? Beavers, porcupines, fishers, bobcats and coyotes are all handling winter like champs, no naps needed. Many small carnivore species are furred up and ready to take on winter. Aside from the snowy owl, most NY owl species do not migrate but since owls are pretty secretive and stealthy, it’s not too surprising to not spot them. There are scores of bird species that do not head south, from cardinals and blue jays to ruffed grouse and turkeys as well as American crows and belted kingfishers - they all stick around for the season. 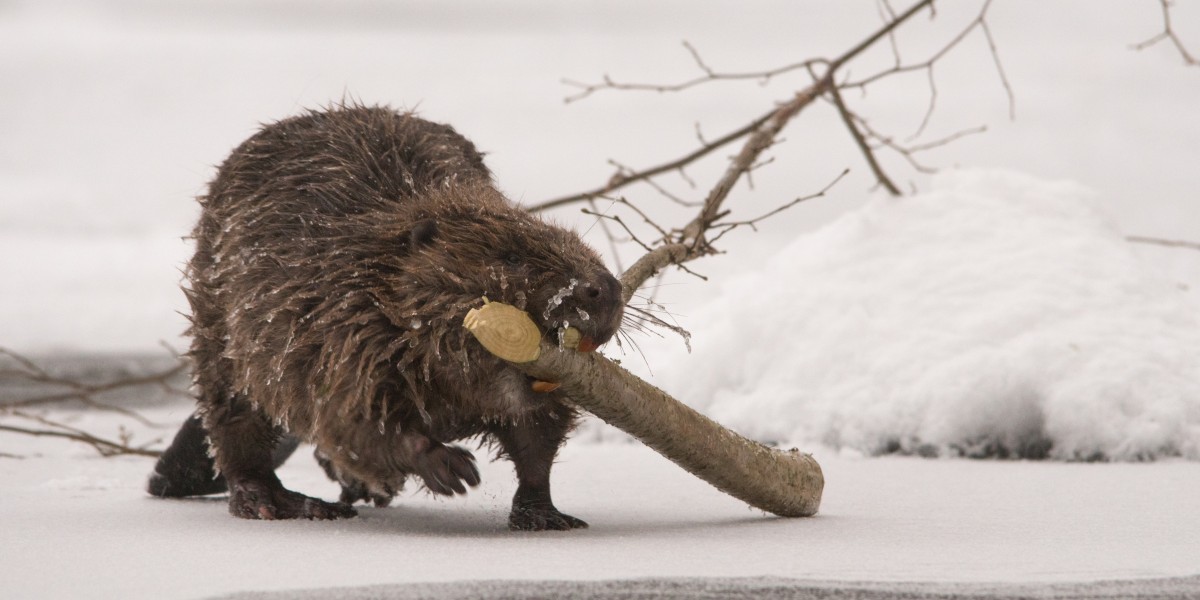 Home repairs happen in the winter too and this beaver is on it! 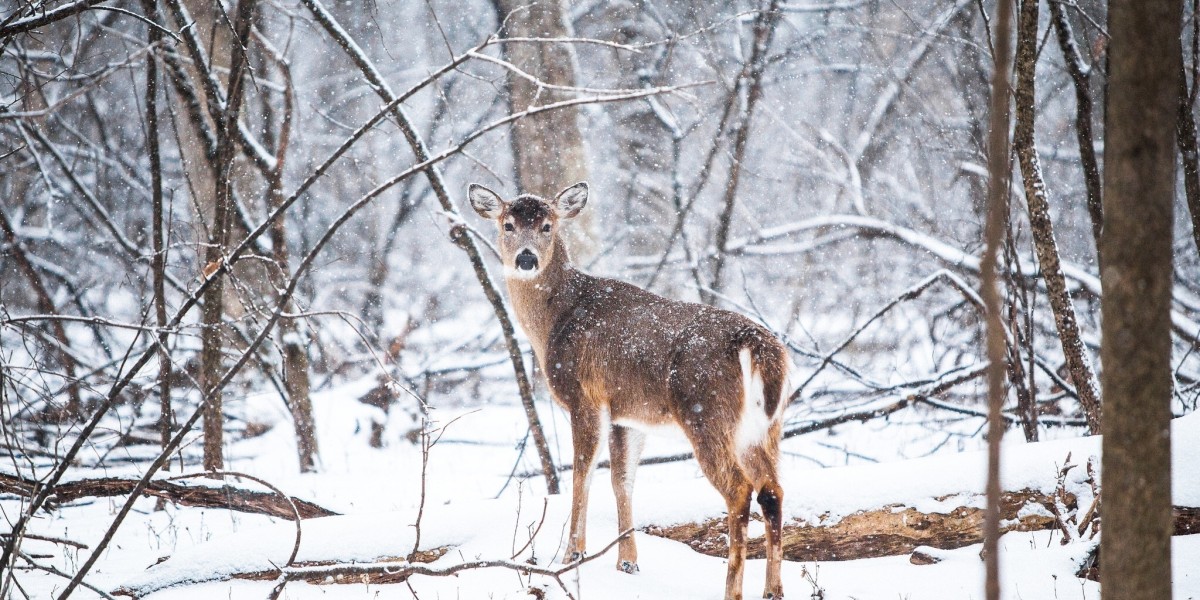 White-tailed deer headed into the woods to munch on shrubs and brush, unbothered by the snow. 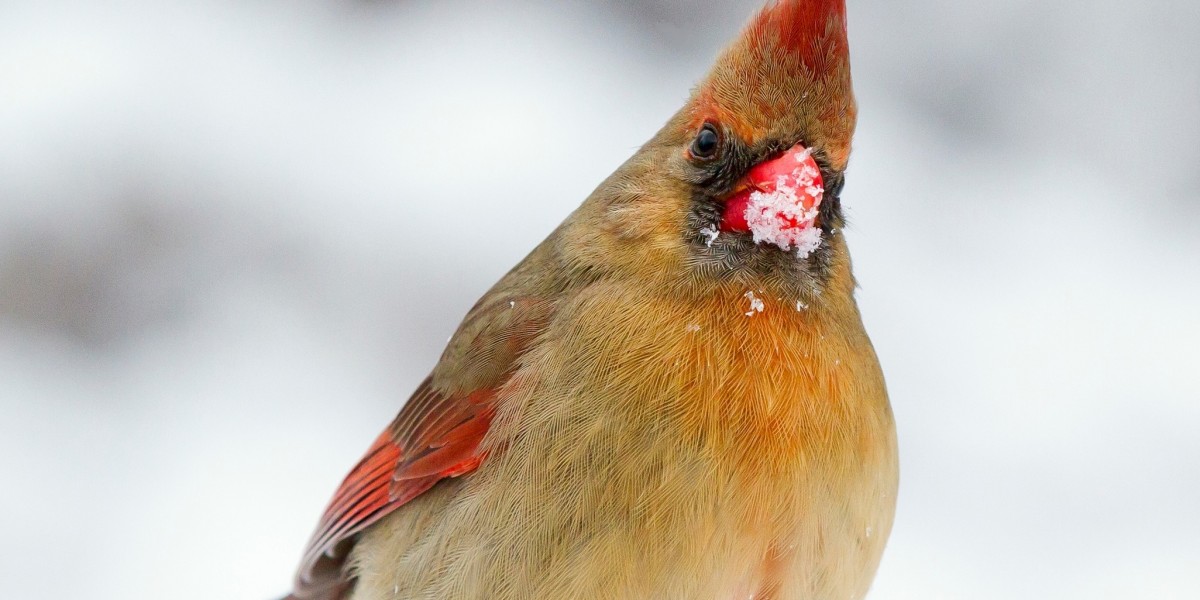 Female cardinal digging for food in the snow. 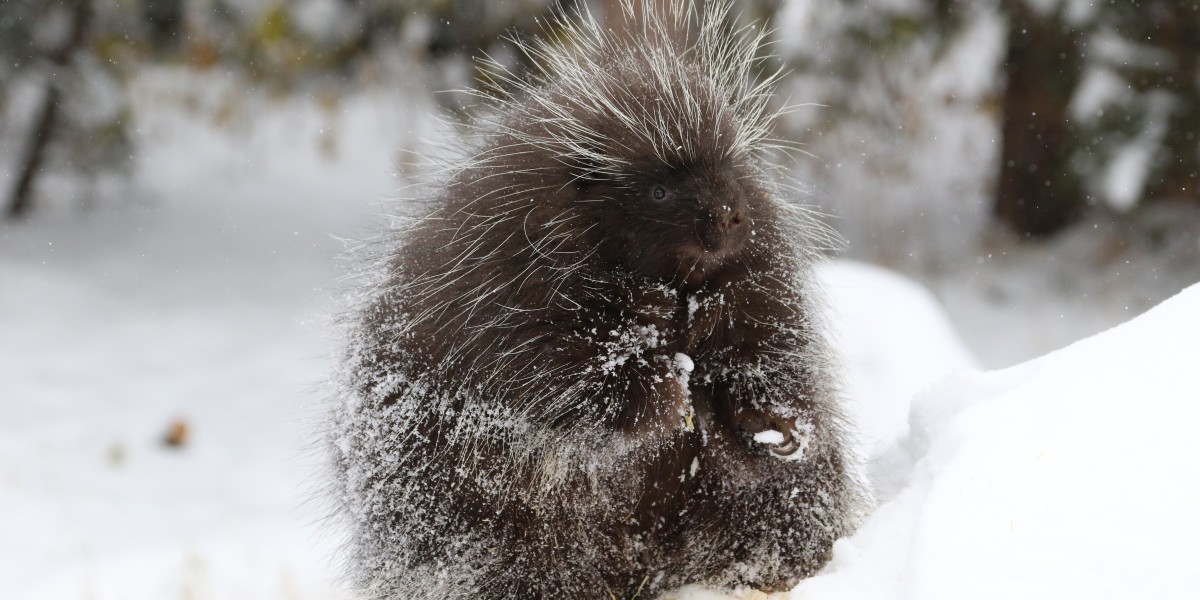 Snow, what snow? Porcupines stay closer to their dens in winter, but venture out when necessary.

Cuddle-Puddles and Butt-breathing - the wonderful world of reptiles and amphibians!

Reptiles and amphibians, being reliant on external heat sources to maintain their body temperatures, employ some surprisingly similar strategies to “warm-blooded” taxa when it comes to overwintering- as well as some very distinct ones!

Much like your average bat or bear, many snakes hibernate in dens. They select locations that are far enough below the surface to stay below the frost line, or move along thermal gradients in the den to remain in the warmest location. Often, species share overwintering locations- in New York, you’ll find timber rattlesnakes, copperheads, racers, and ratsnakes all in big subterranean cuddle-puddles! 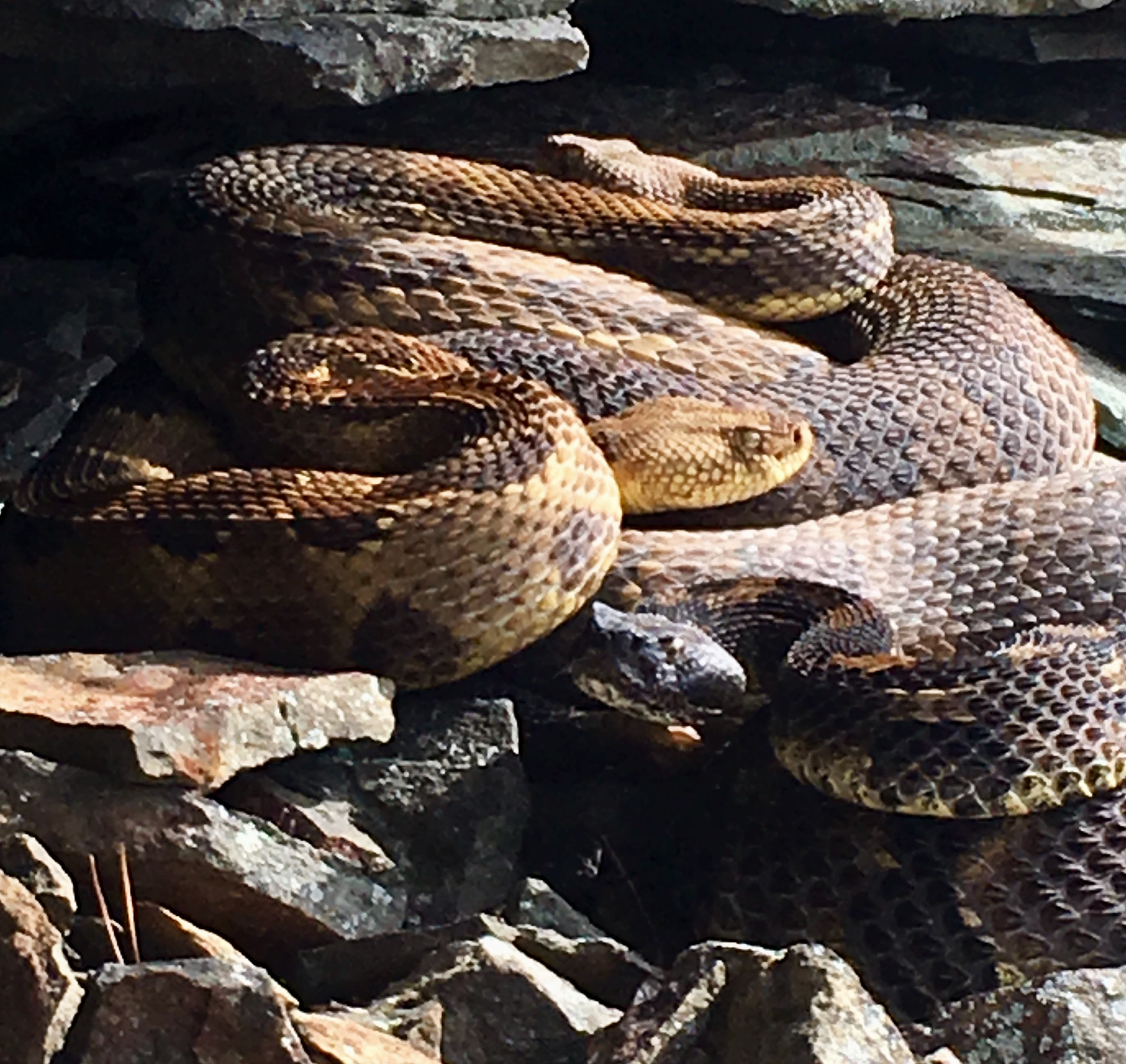 Aquatic reptiles, like many of our turtles, hunker down to rest on the bottom of lakes and streams, or in the mud, for their long winters nap. For those resting on the bottom, sufficient oxygen is present for them to maintain their life processes, though certain species may breathe in part by cutaneous respiration (gas exchange through their skin), or cloacal respiration, which is - you guessed it - butt breathing! The individuals that bury themselves in the mud lower their metabolic rate even further, and can survive anaerobically for up to three months.

Counterintuitively, amphibians are particularly freeze tolerant: some literally freeze! The wood frog is the best example of this - up to 65% of its extracellular fluid is converted to ice, and it ceases heartbeat, blood flow, and brain activity. As soon as the freezing begins, the liver makes cryoprotectants (antifreeze substances that protect tissues from damage due to freezing) and the frogs withstand the brutal temperatures in a safely solid state. Come springtime and warmer weather, they thaw and have the advantage of starting their breeding activity much earlier than species that don’t exhibit the same tolerance. 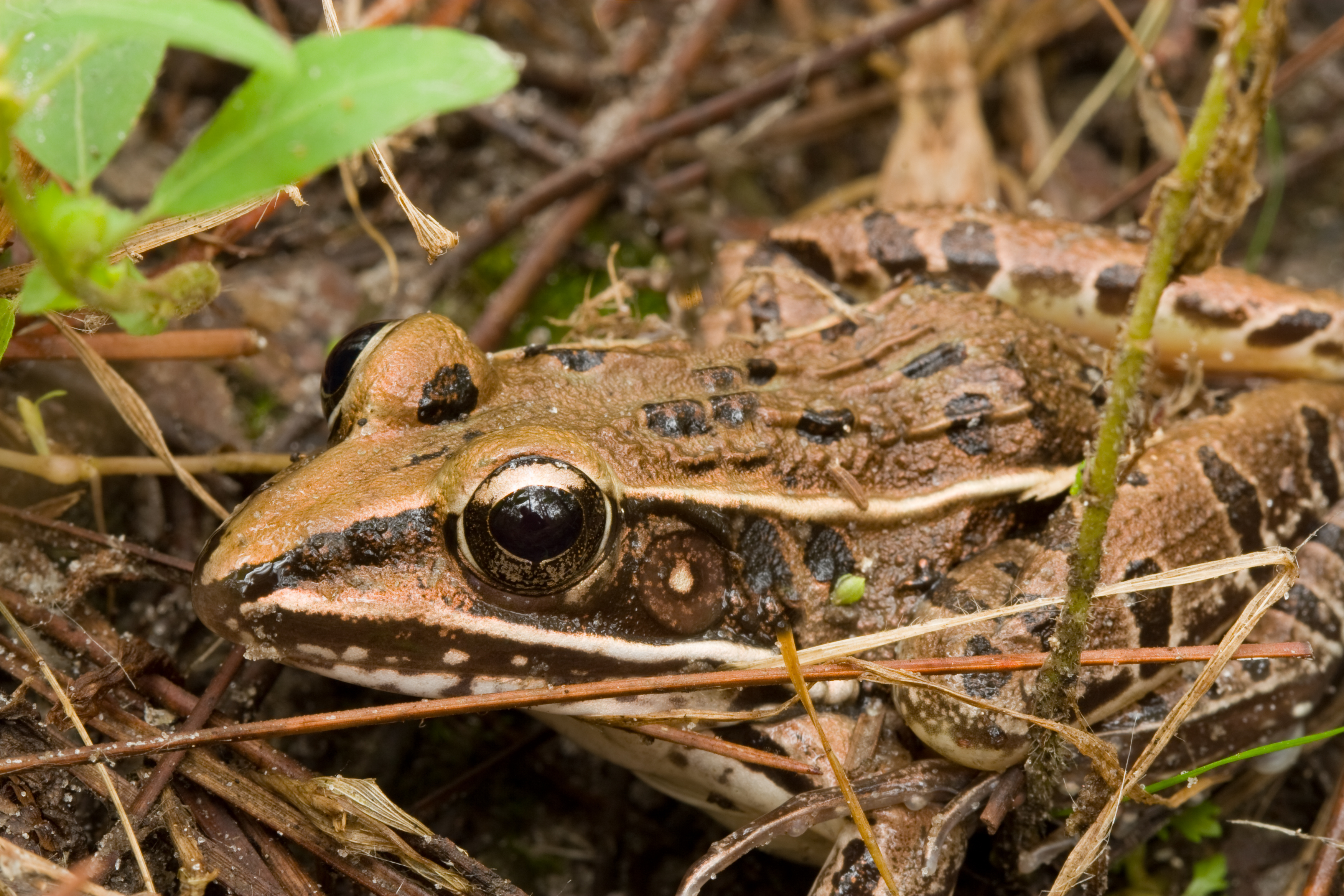 This wood frog will bury itself in leaf litter and virtually freeze solid for the winter.

Why did the woolly bear cross the road?

No one really knows, but it’s likely they are searching for a dry place to spend the winter hibernating – yep this fuzzy wuzzy woolly bear slows its metabolism and hibernates. Technically, with insects this is called diapause, a fairly complex process that comes with some cool perks, like delayed development and the ability to freeze and NOT die. Woolly bear caterpillars, aka Isabella tiger moth, are a great example of diapause. They also have intrigue and myth surrounding them…well, myth at least. Rumor has it that depending on the width of the black and brown bands, it predicts the oncoming intensity of winter. The fact that they freeze solid – yes solid - in the wintertime thanks to a cryoprotectant produced in the tissues, is way more interesting. We find woolly bears hibernating in firewood stacks all winter long, frozen solid, then by the first warm days of spring there is a mass exodus towards anything green and edible. 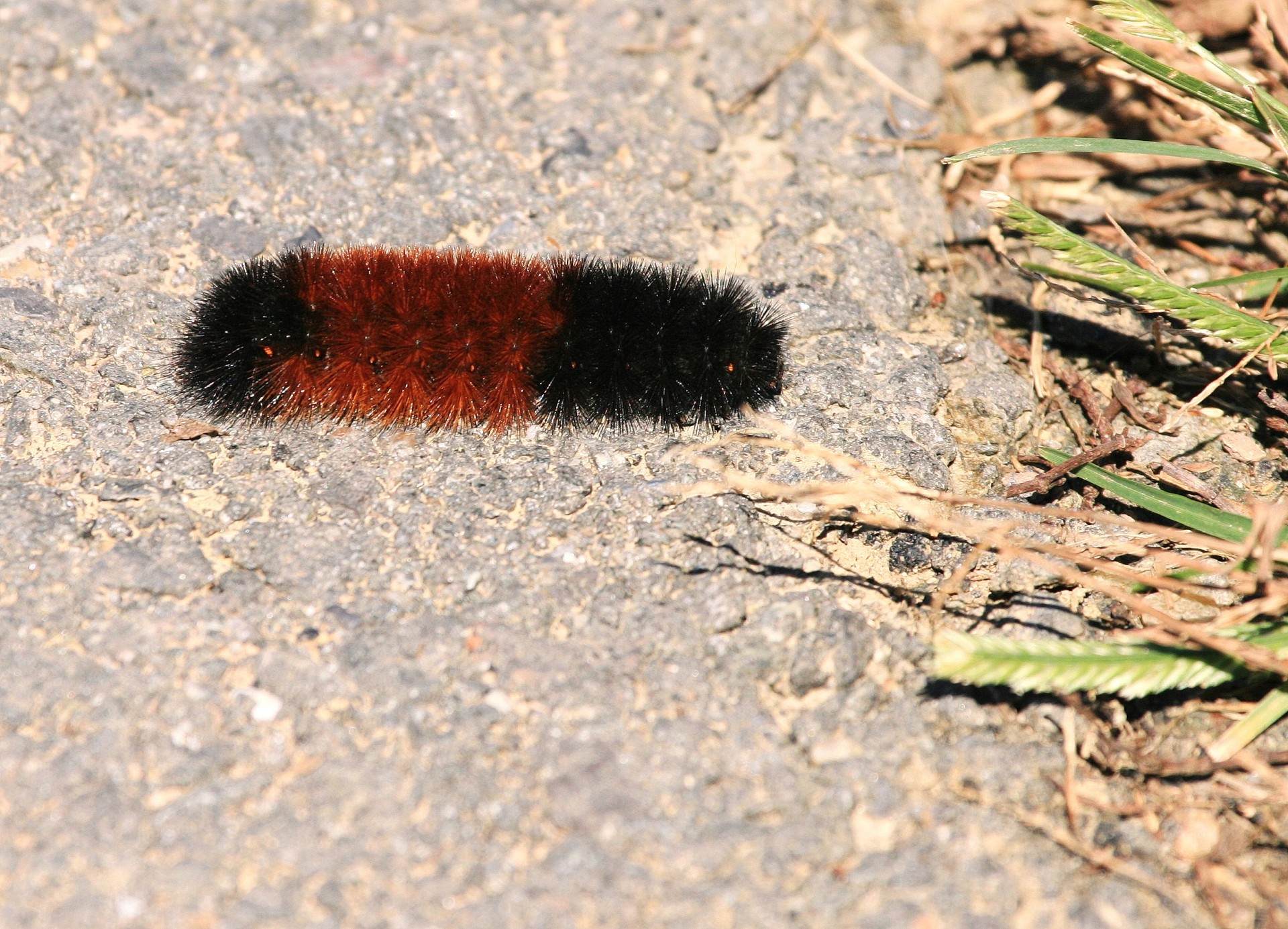 Woolly bear caterpillar on the move

The question on everyone’s mind has got to be - Do spiders survive the winter?  YES some species do! Many spider species only live one season so they are gone by winter but there are many that live longer and they want to find a habitable dwelling, like your house, to overwinter in (Yay!). Species like the wolf spider survive in underground burrows and some species create a fabulous insulated pod of silk to survive in – you'll find these in stacks of firewood all winter long too! This is also how some species protect their eggs to make sure they survive to hatch in the spring. If spiders aren’t cool enough, they also have the ability to produce antifreeze like compounds that circulate in their hemolymph preventing the formation of ice crystals. So have no fear, your 8-legged friends are still around and will be back and ready for your admiration come springtime! 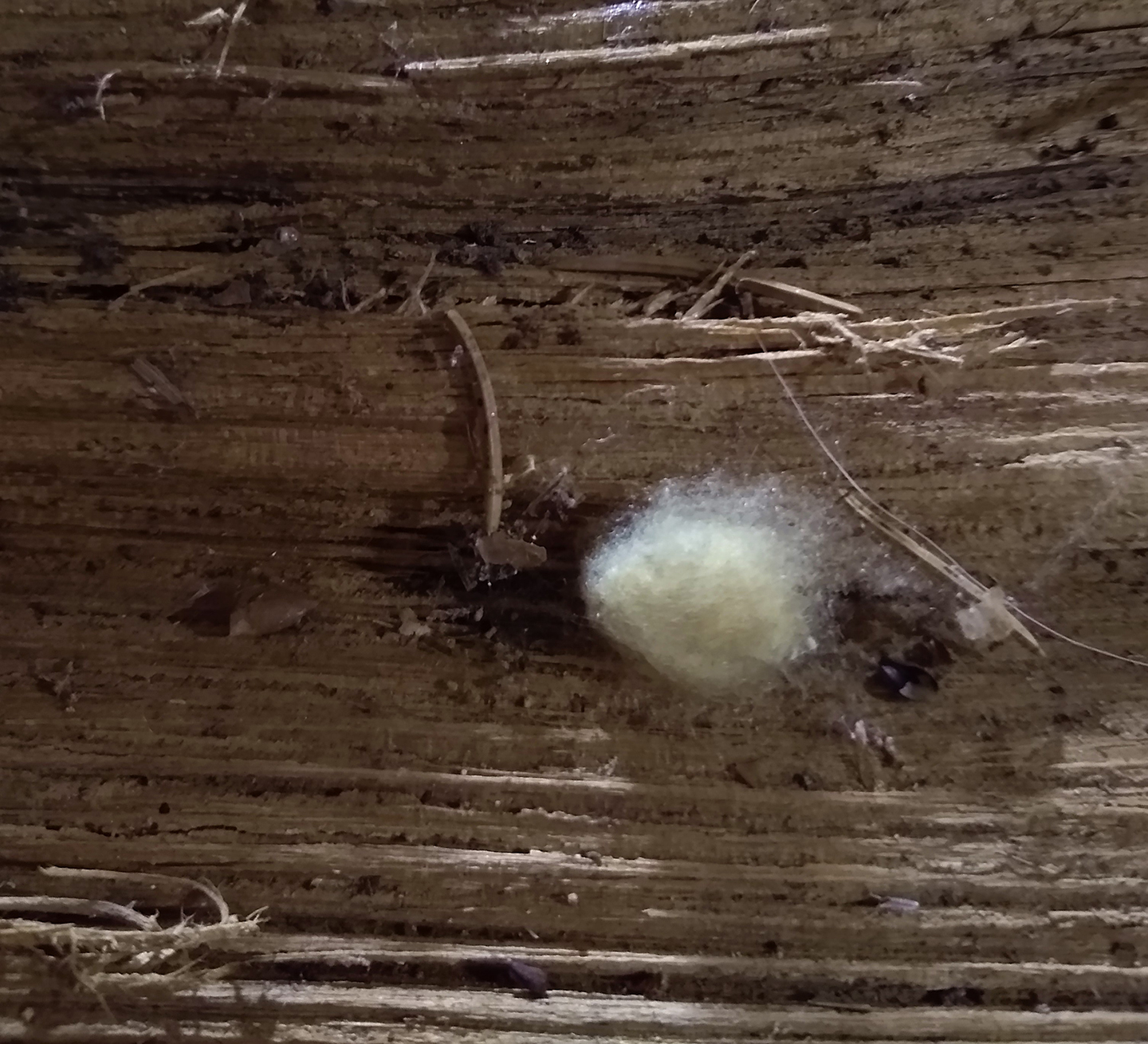