White-nose syndrome (WNS) is caused by the fungus Pseudogymnoascus destructans. The fungus thrives in the cold, humid conditions characteristic of hibernacula, underground caves or mines where bats overwinter. The fungus grows on the nose, wings, and ears of bats during hibernation in the winter months. The mortality rate is often as high as 90-100%.

Millions of bats have died from WNS since 2006. There are now 37 states and 7 Canadian provinces with confirmed cases of WNS in bats. The fungus has also been detected in three additional states and one more province.

Clinical signs of the growth of P. destructans on hibernating bats are typically seen as a white fuzz on the bat’s nose. The fungus may also be visible on the bat’s wings, ears, or tail. Lesions and scarring found on bat wings may be the result of exposure to the fungus.

The fungus is spread from bat-to-bat and from the environment to bats. The fungus can survive in cave sediment leaving the potential for new infections the following winters.

Diagnosis of WNS involves laboratory identification of the white fungus and tissue lesions consistent with an infection. Methods to identify the fungus include fungal culture, histopathological examination (tissue analysis under a microscope), and PCR (testing for
fungal DNA).

There is no practical treatment for colonies affected with WNS.

White-nose syndrome (WNS) was first documented in Scoharie County, New York in 2006. It almost exclusively affects hibernating bats and about half of the 47 bat species in North America hibernate during the winter.

An additional six species, including the endangered Virginia big-eared bat (Corynorhinus townsendii virginianus) and Ozark big-eared bat (Corynorhinus townsendii ingens), have had P. destructans detected but did not have signs of WNS disease. In New York, little brown bats were the first to be affected and have sustained the most number of deaths, resulting in population declines of 90-100% in caves. Half of the endangered Indiana bats that hibernate in New York are located in a former mine which is now contaminated with the fungus. The fungus is not known to affect humans.

While bats hibernate, their body temperature drops and fat reserves are utilized during the winter. The wing membranes provide a particularly favorable cold and high humidity substrate for the growth of the fungus.

Abnormal behavior during the winter is a sign of illness. Bats may fly outside during the day at below-freezing temperatures or may be found clustered near entrances of hibernacula. Groups of dead or dying bats may be found at other locations.

Bats are thought to die of WNS because of starvation and loss of fluids and electrolytes across damaged wing membranes. They arouse more often and earlier than normal while hibernating because of the fungus, which burns vital fat reserves. They may also leave their hibernacula during the winter in search of food. The insect-eating bats are unable to find food to replenish their reserves and die. Although the majority of deaths occur during the winter, deaths can occur year-round. Wing damage may contribute to deaths throughout the year.

In addition to bat-to-bat and environment-to-bat, humans are believed to have contributed to the spread of the fungus from cave to cave by carrying fungal spores on their clothes and recreational caving and research equipment.

To minimize spread of the fungus, people should not handle bats, avoid entering caves and mines with bat colonies, and should decontaminate all equipment and clothing between caves and bat roosts (read the National White-Nose Syndrome Decontamination Protocol).

A North American Bat Monitoring Program was started in 2015 to track changes in bat populations. For a live map, please visit www.whitenosesyndrome.org. 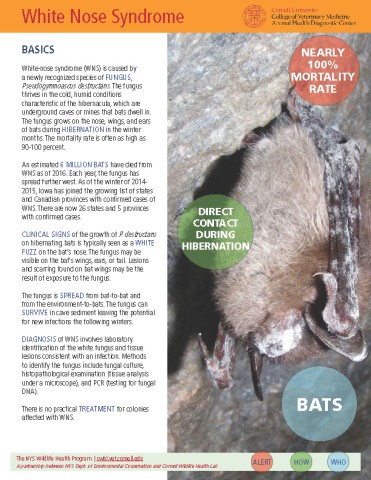