The New York State Department of Environmental Conservation (DEC) today reported three deer in Southampton, Suffolk County, tested positive for bluetongue, which is closely related to the Epizootic Hemorrhagic Disease (EHD) virus and is transmitted in the same way. This is the first time the bluetongue (BT) virus was detected in New York deer. It was detected in several other mid-Atlantic coast states this year. For more information, please visit DEC at https://www.dec.ny.gov/press/126187.html

Diseases are Not Transmissible to Humans or Pets; New Yorkers Encouraged to Report Sick or Dead Deer (link below)

A deceased doe was reported by a homeowner laying alongside a stream in eastern Dutchess County late last week. DEC biologists collected the carcass and were also informed another deer, a buck, had been found deceased on a neighboring property recently. Samples were collected from the doe and submitted to the Cornell Wildlife Health Lab at the AHDC for PCR testing and the results were positive for the epizootic hemorrhagic disease (EHD) virus. This is the first case of the 2022 season, EHD outbreaks are most common in the late summer and early fall. A second deer was reported and tested positive for EHD on August 17, also in Dutchess county.

EHD virus is an often-fatal disease of deer that is transmitted by biting midges, small bugs often called no-see-ums or 'punkies.' The disease is not spread from deer to deer and humans cannot be infected by deer or bites from midges.

Once infected with EHD, deer usually die within 36 hours.  EHD outbreaks are most common in the late summer and early fall when midges are abundant. EHD symptoms include fever, hemorrhage in muscle or organs, and swelling of the head, neck, tongue, and lips. A deer infected with EHD may appear lame or dehydrated. Frequently, infected deer will seek out water sources and many succumb near a water source. There is no treatment or means to prevent EHD. The dead deer do not serve as a source of infection for other animals.

The EHD virus was first confirmed in New York in 2007 with relatively small outbreaks in Albany, Rensselaer, and Niagara counties, and in Rockland County in 2011. From early September to late October 2020, a large EHD outbreak occurred in the lower Hudson Valley, centered in Putnam and Orange counties, with an estimated 1,500 deer mortalities. 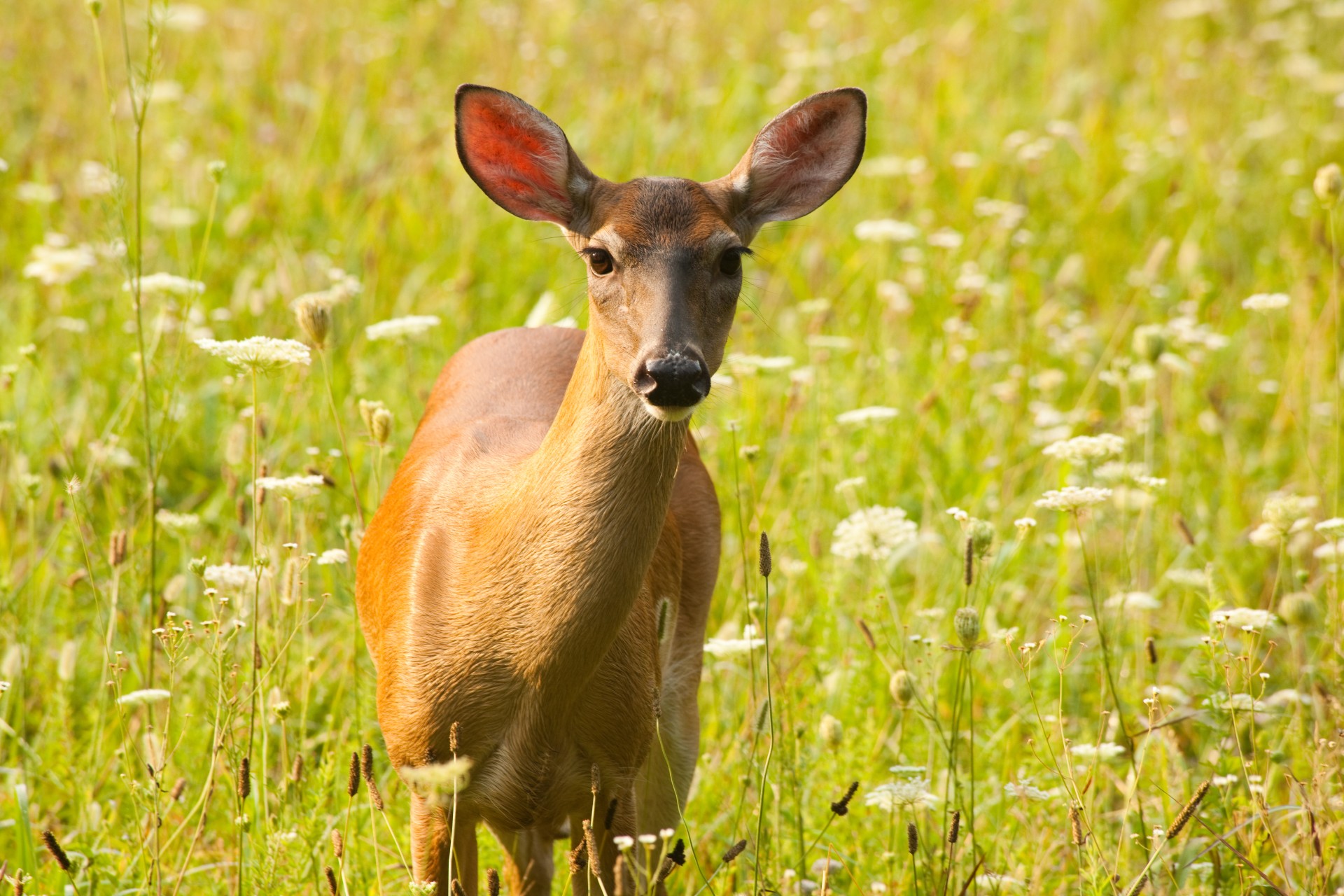 In 2021, the first EHD positive was reported in . After this point, the NYSDEC received reports from the public on an additional 2,156 presumed deer that appeared sick or recently deceased. THe NYSDEC continued receiving reports and testing deer for EHD in counties in which the disease was previoulsy unconfirmed in 2021. The table and map below describe the extent of reports and testing during 2021. 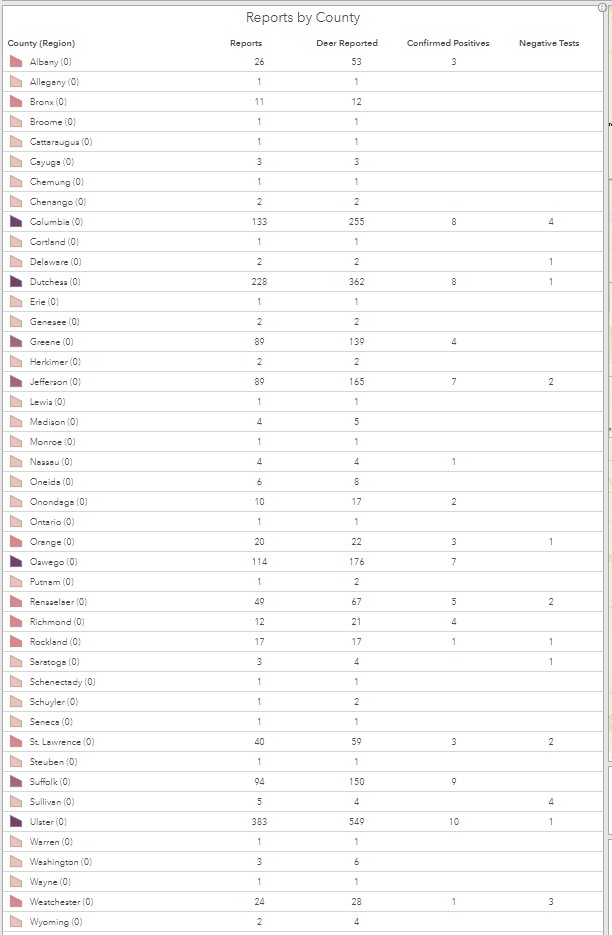 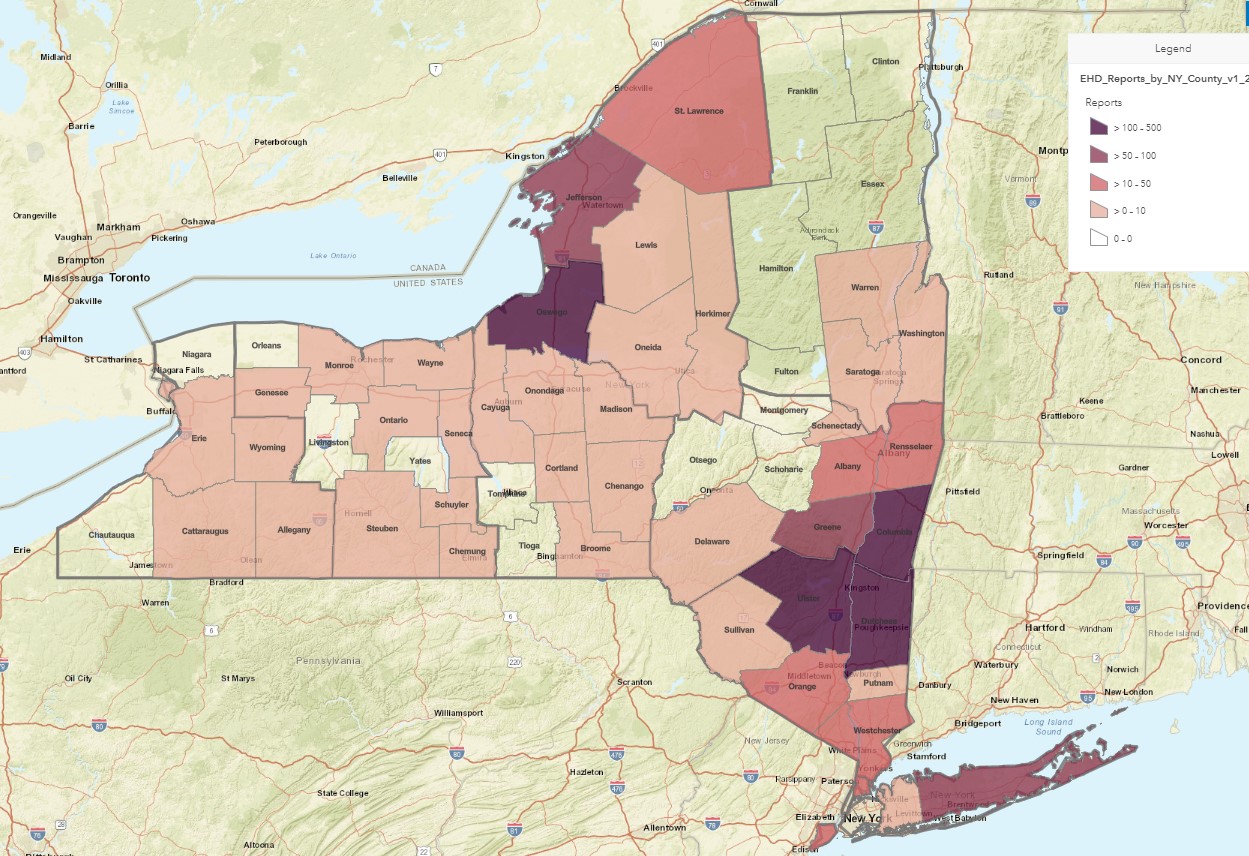 Positive cases of EHD in zoos are also being reported: Seasonal disease kills 4 reindeer at Minnesota Zoo, sickens 4 others

The majority of reports of EHD-suspected mortality are coming from Putnam, eastern Orange, southern Ulster, northeastern Rockland, and northwestern Westchester Counties. Total reports reflect there are approximately 750 deer mortalities in these areas.

DEC has issued a press release with information and guidelines on what hunters may see in the field and what steps they should take. Please visit DEC for more information. DEC Press Release: DEC Asks Bowhunters to Report Deer that May Have Died from EHD

Below is the current list of towns with diagnostically confirmed EHD positive deer. Please also consider any location within 10 miles of a known case to be part of the outbreak area. There are numerous reports of EHD-suspect deer from towns not on this list.

Reports of positive deer in VA, WV, and OH with suspect cases reported in NJ. PA Department of Agriculture has confirmed EHD in a deer from a captive facility in Crawford County in the NW region.

New York State Department of Environmental Conservation has confirmed epizootic hemorrhagic disease (EHD) in two white-tailed deer from Putnam county and four white-tailed deer in Orange county. Please contact the DEC to report sick or dead deer, particularly if there is more than one deer in an area or the deer is near water.

PA, OH, MD, MI, CT, WV, KY, TN, and Ontario are all reporting EHD. PA has confirmed both EHD subtypes 2 and 6 in the state. PA and DE are asking the public to be alert for the disease. Results are pending from North Carolina and Virginia; testing was conducted at the Southeast Cooperative Wildlife Disease Study.

This is the first case in domestic livestock so far this year. Jefferson Co. borders the little piece of WV that sticks up between OH and PA. PA has reported EHD in a white-tailed deer in Beaver Co., which is very close to Jefferson Co. OH.

In deer, the symptoms of EHD include fever; small hemorrhages or bruises in the mouth and nose; and swelling of the head, neck, tongue, and lips. A deer infected with EHD may appear lame or dehydrated. An infected deer may die within 1-3 days after being bitten by the midge or the disease may progress more slowly over weeks or months. Frequently, infected deer will seek out water sources and carcasses are often found near water. Often, a large number of dead or sick deer are found in a limited area. There is no treatment and no means of prevention for EHD. The dead deer do not serve as a source of infection for other animals because the virus is not long lived in dead animals.

Can EHD infect other species, including humans?

EHD does not infect humans, and generally causes mild or inapparent infections in domestic cattle and small ruminants. Another similar virus called Blue Tongue can also infect deer, which is very difficult to tell apart from EHD without laboratory testing. 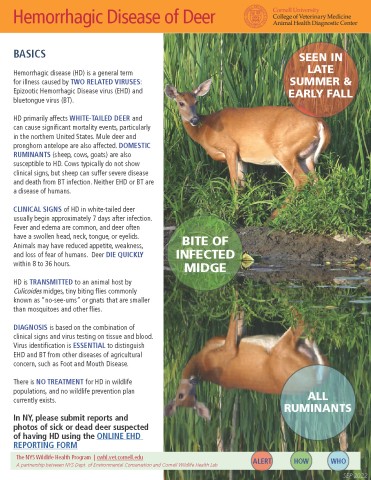