The organism responsible is the fungus Ophidiomyces ophiodiicola, within the family Onygenacea. Snake Fungal Disease (SFD) was first definitively identified in a population of Timber Rattlesnakes residing in New Hampshire in 2006.

The characteristic clinical sign of SFD is facial swelling. The disease can progress from the nasal cavity internally via the eyes, throat, and lungs causing eye infections and pneumonia. The fungus additionally spreads externally along the neck, body, and tail forming scattered nodules (lumps) or ulcerations.

The fungus can be shed into the environment by infected animals and spread from the environment to other snakes, particularly in animals that share dens.  There is no definitive evidence of snake to snake transmission. Spread of the fungus to new locations may occur when people track contaminated soil imbedded in clothing or shoes.

Treatment with antifungal medications has not been successful in colubrid snakes.

Ophidiomyces ophiodiicola is characterized as an environmental saprobe, meaning that it normally feeds on decaying organic matter in the environment. This is evident due to its highly tolerant nature; it can thrive in a wide pH range (5 - 11 ), it is drought tolerant, and can utilize a number of complex carbon, nitrogen and sulfur compounds. Evidence that this organism is a saprobe makes it likely that infection of snakes is opportunistic.

O. ophiodiicola is closely related to Chrysosporium Anamorph Nannizziopsis Vriessii (CANV) complex. Many early reports of snake fungal disease identify CANV as the causative organism but the fungus has since been reclassified.

Both colubrids and pit vipers in Eastern and Midwestern United States have been identified with SFD. Recent advances in molecular diagnostics have allowed identification of cases dating back as far as 1986.

Incubation period is between 30 to 37 days with some showing clinical signs as early as day 12 of inoculation. In rare cases where there are wounds secondary to the infection, the fungus can penetrate the body and cause a systemic fungal infection resulting in nodules on the coelomic fat pad, kidneys, liver and air sac. Experimental data shows snakes surviving an average of 90 days with SFD and having a 40% mortality rate.

Since O. ophiodiicola is an environmental saprobe, it is likely that the fungus resides in the soil. There have been a number of cases of captive snake populations becoming infected as well.

Several studies have indicated that temperature is a signiﬁcant factor affecting the growth of O. ophiodiicola. This suggests that populations hibernating in the lower thermal range of 0 °C - 10 °C should have a reduced infection during the spring and summer than snakes that hibernate in the upper thermal range of 0 °C - 10 °C. In addition, data suggest that with increasing global temperatures, snake populations will be more vulnerable to O.ophiodiicola.

Methods to identify the fungus include histopathological examination via skin biopsy, fungal culture, and real-time or quantitative polymerase chain reaction (rtPCR and qPCR). 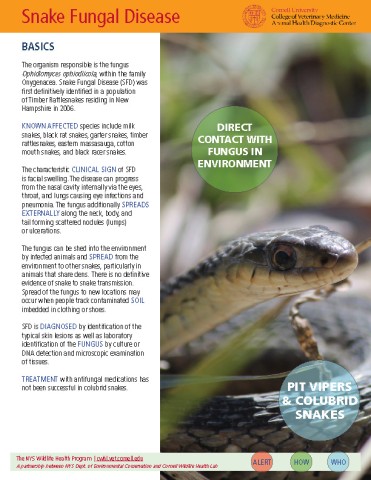