Once introduced the fungus is capable of surviving in the environment, in the leaf litter and small water bodies, even in the absence of salamanders.

Clinical signs of infected skin may show reddening and ulceration, and infection is often followed by secondary bacterial infection. Skin lesions are not always obvious, however, and some animals may carry the fungus without clinical signs. In some cases all that is observed is severe lethargy, sometimes weight loss, followed by a quick death.

Chytrid fungi can be transmitted through contact with water or organic matter (mud, leaf litter, etc.), or by direct contact with an infected salamander.

To diagnose the disease chytridiomycosis it is necessary to confirm the presence of both skin lesions and fungus. Detection of the fungus can be done with a DNA (PCR) test, usually from a skin swab.

The first cases occurred in The Netherlands, as outbreaks in native fire salamanders, Salamandra salamandra. Further work discovered that the fungus is present in Thailand, Vietnam, and Japan, and originated in native Eastern Asian salamanders without causing significant disease. Evidence suggests that the fungus was introduced to Europe in the last decade or so, probably through imported pet salamanders that can act as carriers.

Little is known about the susceptibility of most North American salamanders but, based on experimental trials, at least two species, the Eastern newt (Notophthalmus viridescens) and the rough-skinned newt (Taricha granulosa), are highly susceptible to the fungus and could experience similar high mortalities. Several hundred species may be sensitive to this disease.

If B. salamandrivorans is introduced into North America, it will likely become permanently established and, based on experience with frog chytridiomycosis, impossible to eradicate.

The fungus produces motile zoospores, capable not only of surviving in water and moist environments but also of short distance dispersal through active swimming. Because the fungus and its infectious zoospores can survive in the absence of an infected host, transmission from an outbreak site to adjacent areas can occur both through dispersal of infected salamanders and through human activities, such as movement of soil, water or even fishing bait.

Infection (presence of the fungus in a host) and disease (ill effects on the host) are not the same thing. Some species of salamanders, the Asian carriers for instance, can be infected but do not develop disease. Confirmation of the fungus in skin sections, along with evidence of skin damage, is necessary to confirm disease.

Research specific to treatment of B. salamandrivorans has only begun. Antifungal drugs could prove effective against the salamander chytrid fungus in captive individuals.

As with frog chytrid fungus, salamander chytridiomycosis could be spread during anthropogenic activities. Boots, clothes, and all field equipment should be cleaned with a 10% bleach-water mixture before moving between sites. Pet salamanders should never be released to the wild. Water used in captive enclosures should never be dumped outside on the ground.

All newly acquired captive amphibians should be initially quarantined from other amphibians until it has been confirmed that they are disease free.

Suspicious deaths of salamanders both in the wild and in captivity should be reported to enable early detection of this disease. 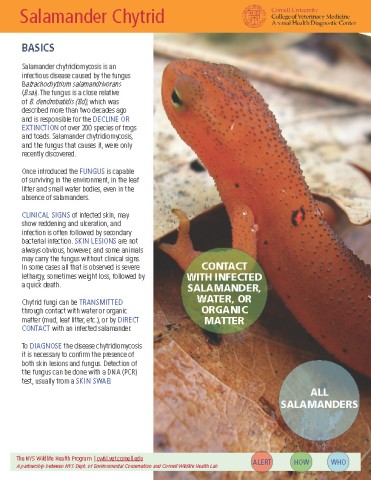