Rodenticides are toxic to many species of birds and mammals including pets, farm animals, and wildlife species. The time between exposure and development of clinical signs is dependent upon the specific chemical and amount consumed.

Ingestion of a significant amount of anticoagulant rodenticides results in interference with blood coagulation and spontaneous bleeding. Specific clinical signs can include widespread bruising, bleeding into body cavities, and blood in the urine or feces; if the bleeding is sudden and significant, then cardiovascular shock and death can result. Bleeding can occur internally or externally and can affect any part of the body.

There are currently no blood tests for birds for anticoagulant rodenticide exposure.

Diagnosis of non-anticoagulant rodenticide toxicity is based on detection of the chemical in the digestive system or tissues of the animal.

Over 40 cases of rodenticide poisonings in wildlife were identified by the New York State Wildlife Health Program between 2012 and 2014. Animals affected included several species of birds that prey on rodents, including red-tailed hawks and owls. In addition, squirrels, skunks, raccoons, and woodchucks died from rodenticide poisoning.

Lack of vitamin K prevents the liver from making blood clotting factors, and once the body stores run out, blood will not clot normally. Common anticoagulant rodenticides include warfarin, diphacinone, chlorphacinone, brodifacoum, difenacoum, and bromadiolone.

Although the targets of rodenticides are rodent pests, non-target animals can ingest the products from open bait containers or indirectly become exposed by consuming poisoned rodents.  Pets and children are at risk of consuming rodenticides used in the household, and caution should be used when setting household baits to avoid accidental poisoning.

Because animals maintain body stores of blood clotting factors, there is typically a delay of 3-5 days between ingestion of the anticoagulant rodenticides and the onset of bleeding.   In many cases of secondary poisoning (ingestion of poisoned rodents), smaller, non-lethal doses are consumed repeatedly. Because these compounds can last in the liver of the animal for months, these repeat exposures may have cumulative effects on coagulation.

Bromethalin can cause rapid onset of seizures when high doses are consumed along with clinical signs such as muscular hyperexcitability, muscle tremors, increased reflexes in the hind limbs, and hyperthermia (elevated body temperature). At lower doses, animals may have hind limb weakness, ataxia (imbalance), and depression.  There is no available antidote for bromethalin exposure.

Strychnine inhibits the neurotransmitter glycine in the spinal cord. Poisoning occurs within one hour of ingestion and can lead to neurologic signs such as muscle twitching, stiffened neck, dilated pupils, seizures, and hypersensitivity. Animals can have severe muscle rigidity and seizures which increase in frequency. Eventually, exhaustion or respiratory paralysis can lead to death.

Cholecalciferol (Vitamin D3) increases serum phosphate and calcium and may lead to kidney failure, cardiac abnormalities, and hypertension, as well as nonspecific clinical signs. Calcification of soft tissues because of the high calcium and phosphorus levels is possible.

Zinc phosphide releases phosphine gas into the bloodstream following contact of the bait with stomach acid. Nonspecific clinical signs can include anorexia, nausea, vomiting with or without blood, diarrhea, and lethargy.

Anticoagulant rodenticide toxicity is suspected when an animal has signs of spontaneous hemorrhage and rodenticide in the blood or liver.  Because of the delay between ingestion and clinical signs, the bait or poisoned rodent is usually not present in the digestive tract by the time the animal is sick.

Laboratory detection of anticoagulant in the blood, liver, or kidney does not necessarily confirm rodenticide poisoning as cause of death in wild animals because many live wild animals have exposure to these compounds.

Bromethalin poisoning can be diagnosed based on history, clinical signs, and the presence of the chemical in liver, kidney, brain, or fat. Zinc phosphide poisoning is difficult to diagnose because phosphine gas doesn't remain long in the stomach.

Because the second generation anticoagulant rodenticides can be very long acting, treatment may be required for weeks to months.

When ingestion is recent, stomach flushing or induction of vomiting followed by activated charcoal administration can help prevent more absorption. Cholecalciferol treatment may include medications to increase calcium excretion in the urine and help prevent absorption from the digestive tract. 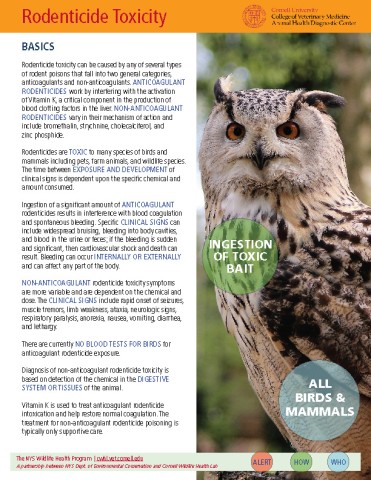