Adult roundworms live in the intestines of definitive hosts, mainly raccoons, and release over 150,000 eggs each per day. The eggs are then shed in the feces. The eggs are resistant to drying, cold, and heat and can remain viable for up to several years, especially in moist soil.

Transmission occurs when eggs are ingested from the environment and then hatch in the small intestine where they penetrate into the bloodstream.

When animals other than raccoons are infected, the parasite larvae migrate through the organs and tissues of the affected animal or human, which can cause severe damage and disease.

Raccoons are often asymptomatic unless the parasite load is large enough to cause intestinal obstruction. Clinical signs may occur including lethargy, depression, or unkempt hair coat in some intermediate hosts. The aggressive migration of the larvae can cause tissue damage and inflammation in other hosts. Invasion of the central nervous system or eye results in neurologic or ocular clinical signs, respectively.

Raccoons and other definitive hosts can be treated with common anti-parasitic drugs used in domestic dogs and cats.

Ascarids undergo a complex life cycle involving multiple hosts. Eggs are extremely resistant and survive for long periods of time in the environment, which helps to ensure successful infection of a susceptible host.

Domestic dogs and kinkajous can also be definitive hosts, and potentially coatimundis and ringtails. Rodents, rabbits, primates, and birds are particularly susceptible to larval migration in the brain, which can cause progressive neurologic signs. Birds are highly susceptible with at least 40 species affected, but Baylisascaris larval migrans has not been reported in livestock.

Over a period of approximately 2 to 4 weeks, the B. procyonis eggs develop into infective form with larvae inside. Freezing has little effect on the eggs and they are resistant to disinfectants, but high heat over 62 degrees celsius will destroy the eggs.

Intermediate hosts, which are hosts in which parasites grow and go through larval stages but do not reach sexual maturity, are critical to the life cycle of the roundworms. After moving through the liver and heart, they are distributed to other parts of the body where they can cause damage to tissues while migrating.

Three types of larval migrans can occur depending on which tissues are affected: ocular (eye), neural (brain), and visceral (abdominal organs). Larvae eventually form cysts in connective tissue and muscle. Raccoons and other definitive hosts can become infected from ingesting eggs from the environment or cysts from infected animals. Larvae hatch out and then develop in the intestinal wall, eventually maturing into adults in the intestine.

Clinical disease in humans, termed baylisascariasis, is rare, but exposure of humans to raccoons and areas where they defecate makes infection with the parasite more likely. Less than 25 human cases of disease have occurred in the United States, but New York State is one of ten states where it has been reported. Infection can occur at any time of year, especially since eggs can persist in the environment, but a study on raccoons in New York in 1989 showed that more raccoons shed B. procyonis eggs in the fall. Young children may be more prone to infection because they put contaminated soil or objects into their mouths. 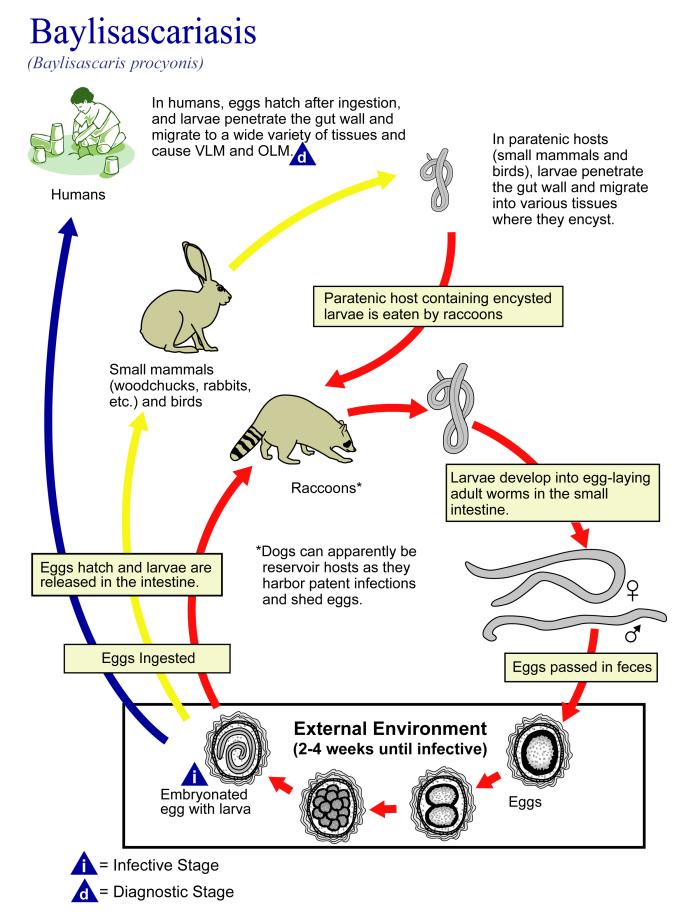 In humans, symptoms may include behavioral changes, irritability, speech deficits, seizures, and coma. Neurologic cases may result in permanent deficits and can be fatal. Ocular signs can occur independently of neurologic signs in humans and include changes in vision and possibly irreversible blindness.

Neurologic signs can vary depending on where in the brain the larvae are located but may include circling, rolling, ataxia (loss of coordination), tremors, weakness, paralysis, hypertonia (abnormal increase in muscle tension), seizures, or difficulty swallowing.

Intermediate hosts do not shed eggs in the feces. The incubation period is about 2 to 4 weeks in intermediate hosts. In live animals, larval migrans is difficult to demonstrate, so suspicion relies on a combination of clinical signs and exposure to the environment.

Identification of the individual larvae or their tracks in tissues at necropsy is difficult, making misdiagnosis a common problem. In humans with ocular migration, large, motile larvae may be seen in the retina. The challenge of definitively diagnosing B. procyonis suggests that infection may be underdiagnosed.

Albendazole is typically used in the treatment of larval migrans in the brain or spinal cord, but irreversible damage has usually occurred by the time of diagnosis. It is most effective when used in early infection, especially before clinical signs develop. Corticosteroids may help control inflammation.

Routine hygiene will prevent most infections including washing of hands and avoiding eating, drinking or touching the face when working in areas where raccoons may have defecated. Because the eggs require time to mature in the environment before they can become infective, direct handling of raccoons is less of a risk, but it is always a good practice to wear gloves when coming in contact with live or dead wildlife. 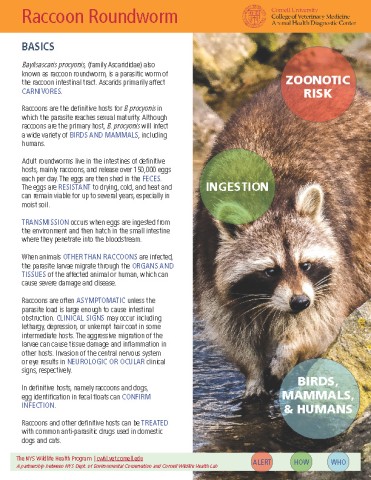