Rabbit Hemorrhagic Disease Virus (RHDV) is a Lagovirus (Calicivirus family) that affects lagomorphs (rabbits, hares, and pikas). There are several strains of RHDV, RHDV2 is a new strain and has displaced RHDV in most areas. RHDV viruses are highly contagious with high mortality rates (up to 100%).

All domestic rabbits (O. cuniculus) are susceptible to infection. The imperiled New England cottontail (Sylvilagus transitionalis) and the snowshoe hare (Lepus americanus) are also likely to be susceptible. RHDV2 does not infect humans, livestock or pets.

There are four main forms of infection with similar clinical signs and they do not differ between the various viral strains. In the very rapid peracute disease, clinical signs are usually absent except terminal vocalizations, followed by collapse and death within 12 to 36 hours.

The less rapid acute form may present with a wide range of signs such as bleeding from the mouth, nose or rectum, fever, and difficulty breathing, hemorrhages in the eye, blood in the feces, and yellow mucus membranes may also be observed secondary to anemia and coagulation abnormalities caused by the virus. The subacute form is characterized by the same clinical signs but they are less severe with a possibility of survival. Neurologic signs include loss of coordination and seizures, depression, lethargy, and the loss of appetite.

RHDV2 is very easily transmitted by direct contact between rabbits or with contaminated environments or objects, like carcasses or animal products. The virus can also be transmitted by mechanical vectors like insects, scavengers or predators.

There is no treatment for rabbit hemorrhagic disease. Wild rabbits are typically found dead, sometimes with blood around the nose.

RHDV2 is a new strain, classified as a Foreign Animal Disease (FAD) first detected in France in 2010. It soon displaced RHDV in many countries. RHDV2 has the capability of spreading through wild populations very quickly; it spread across the continent of Australia in less than 2 years.

In North America, there have been sporadic domestic rabbit outbreaks of RHDV2 between 2018-2020. In March 2020, 11 domestic rabbits died during a RHDV2 outbreak in Manhattan (NYC) at an exotic animal vet clinic. Beginning in March 2020, there have been RHDV2 outbreaks in both domestic and wild rabbits in New Mexico, Arizona, Texas, Colorado, Nevada, California, Utah, and Mexico.

Unlike RHDV, RHDV2 has the ability to infect North American species of wild rabbits and hares. Native eastern cottontail rabbits (Sylvilagus floridanus) have been shown to be susceptible experimentally with 3 out of 5 dying within 4-6 days after exposure.

RHDV2 is shed in all infected rabbit body secretions including saliva, urine and feces. Oral transmission is most common, but the virus can also
be infectious via nasal and conjunctiva routes.

The virus is very resilient in the environment where it can remain viable for 3 months or more in decaying carcasses. Contaminated objects and rabbit products like caging, bedding material, food, wool, rabbit meat, clothing, and shoes can harbor infectious virus for 3-4 months. The fatality rate of RHDV2 ranges from 40 to 80% in wild rabbits. Rabbits that survive the virus can shed it for 30 days or more.

Domestic rabbits may develop a fever and die suddenly within 12-36 hours post-infection or may survive longer and develop depression, anorexia, reddening of the conjunctiva, or respiratory signs. Infected wild rabbits are generally found dead.

RHDV is diagnosed through necropsy. The liver presents as pale or with necrosis and the spleen enlarged. Hemorrhages may be observed in the trachea, lungs, heart, liver, spleen, and kidney. Diagnosis is confirmed by PCR tests.

RHDV2 is currently not known to exist in NY rabbit populations. Please do not move domestic rabbits from other states or rabbit products to contain the virus. If you have been to an affected states, disinfect potentially contaminated clothing and footwear.

RHDV2 is a reportable disease, please contact NYSDAM with any positive results in domestic rabbits. If you find multiple dead rabbits (2 or more), please contact the nearest NYSDEC Wildlife Office. 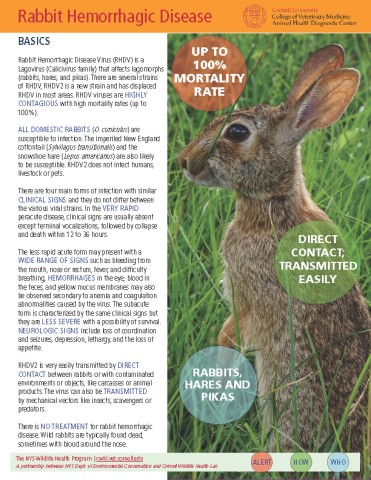