Parvoviruses are capable of infecting and causing disease in carnivores and are found worldwide.

Wildlife species that can be infected with parvoviruses include coyotes, wolves, foxes, raccoons, minks, and bobcats. Parvoviruses can also infect domestic cats and dogs.

Parvoviruses are very hardy and can survive for months in cool, moist conditions protected from sunlight and remain viable when frozen.

Clinical signs in animals include lethargy, depression, and inappetence about four or five days after exposure followed by fever, vomiting, and diarrhea. Feces may range from soft to liquid consistency but are typically foul-smelling and may contain mucous or blood.

Transmission of parvovirus occurs when it is shed through the feces of an infected animal and then ingested by another. This is most likely through ingestion of the virus from the environment or by preying on an infected animal. Environmental contamination is usually due to viruses that have been shed 4-10 days after infection.

Diagnosis is made based on the severity of symptoms associated with parvoviruses. The virus can be detected in feces by ELISA tests or by virus isolation in tissue culture. Also by identification of lesions within the intestines, brain and spinal cord, or lymph tissue during necropsy.

There are no treatment for parvovirus infections, only supportive care. Juveniles between the ages of two and four months are most at risk while adults often have immunity against the virus. Mortality may be significant in populations naïve to the virus but epidemics have rarely been reported.

Preventative vaccines for domestic cats and dogs helps control the spread of parvovirus.

Within about four weeks of recovering from illness, dogs are no longer contagious but cats can shed the virus for several weeks after recovery. It has been suggested that mink can maintain a carrier state for up to a year. Vaccinated dogs and mink may contribute to environmental contamination as a result of non-symptomatic infections.

Can be seen year-round but since parvovirus infections are more common in juveniles, disease will likely be observed more in the late spring or early summer months due to seasonality of breeding.

If samples are taken after day five or six of illness when the antibody response is neutralizing the virus, false-negative results may be likely.

It’s also possible to recognize viral proteins in the nucleus of cells. Demonstrating the viral antigen or nucleic acid by using immune or molecular probes in tissue sections can also aid in diagnosis. Isolating and characterizing the type of parvovirus involved is commonly the only way for a definitive diagnosis.

The goal of treatment is to mitigate the effects of dehydration and electrolyte imbalance due to gastroenteritis.

Vaccines may be considered in captive populations but are generally not practical in other settings. Modified live vaccines are recommended in captive wild carnivores that may be susceptible but would be considered off-label use. If introducing a new animal into a facility, it should be quarantined for a minimum of 30 days

Isolating individuals suspected to be infected and decontaminating the environment may aid in preventing further spread of the virus. Parvoviruses are resistant to some common disinfectants and, except those containing formaldehyde, glutaraldehyde, or chlorine. 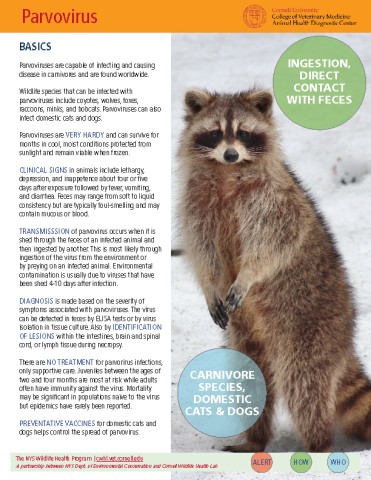