Parelaphostrongylus tenuis, commonly called brain worm or meningeal worm, is a parasitic nematode (roundworm) that infects multiple species of hooved mammals. The white-tailed deer serves as the definitive or natural host, meaning that worms are able to reproduce and lay eggs within the animal, and infected deer shed larvae in their feces.

Approximately 80% of white-tailed deer are estimated to be infected in endemic regions, and although it is rare for them to appear sick, they can contribute to spreading the parasite to other animals.

Clinical signs of infections are rare in white-tailed deer except at very high parasite loads, but if they do exhibit signs, they can include temporary lameness (particularly in fawns), circling, and other neurological abnormalities.

Transmission occurs by accidental ingestion of infected gastropods (snails) while grazing. The larvae move through the digestive tract of the host and travel along spinal nerves to get to the spinal cord and brain, where they mature into reproducing adults and lay eggs. The eggs hatch into larvae and migrate through the bloodstream to the lungs. Larvae are coughed up and swallowed and travel though the gastrointestinal tract to be shed in the deer’s feces.

Diagnosis in white-tailed deer requires fecal analysis by a modified Baermann technique to isolate larvae for confirmation by PCR. Detection in feces without PCR identification is inadequate because larvae are identical to muscle worm (P. andersoni) larvae. In other species, there is no diagnostic test, but therapy may be initiated in suspect cases.

In animals with neurologic signs, early initiation of treatment is key. Not all drugs effectively penetrate into the central nervous system, and any anthelmintic drugs won’t reach therapeutic levels in the brain.

Infected white-tailed deer transmit the parasite to gastropods which can then be ingested and cause disease in captive livestock, including domestic sheep and goats, llamas, alpacas, camels, and rarely domestic cattle or horses. Transmission to humans has not been reported.

Moose, mule deer, black-tailed deer, elk, caribou/reindeer, pronghorns, and big-horned sheep are also susceptible. However, worms don’t usually mature to reproductive adults in these aberrant or “dead-end” hosts, and these hosts don’t shed larvae in their feces. Instead, worms may migrate through the brain and spinal cord and cause severe neurological disease and death.

Parelaphostrongylus tenuis may play an important role in preventing animals such as mule deer, elk, and caribou from living in areas with a high population of white-tailed deer. In addition, the parasite may also be contributing to moose population declines in certain areas of the US and Canada.

The time from ingestion to fecal shedding ranges from 82-137 days and is inversely proportional to infection dose, meaning the more worms there are, the less time it takes to shed larvae in feces. Most fawns are exposed by the second summer of life, and may become immune to additional worm infection. Infection with both a male and female worm is necessary for the deer to produce eggs and larvae, so some deer with single worm infections may never shed.

Gastropods (like snails) serve as the intermediate host and become infected when larvae penetrate the foot. Once in the intermediate host, the larvae develop, allowing the cycle to continue when deer, moose, or other susceptible hosts consume the infected slug or snail while feeding on plants. Transmission typically occurs during summer and early autumn months when gastropods are more active due to a more favorable climate.

In moose and other aberrant hosts, ingested larvae migrate to the spinal cord and disrupt nervous tissue by physically destroying the tissue or by causing inflammation. In these animals, larvae often die before reaching the brain or maturing to reproductive egg-laying adults, so they only rarely shed larvae in their feces.

Signs typically appear 30-60 days post-ingestion, although incubation periods as short as 5 days have been reported. Recognizing early clinical signs may be tricky though; some animals may appear to recover from their symptoms as the parasites travel through different parts of the brain/spinal cord, but neurological signs typically return after a few days and may be permanent. Paralysis, lack of fear or inappropriate behavior causing them to be shot or struck by motor vehicles; starvation or malnutrition may ultimately cause fatalities.

In moose and other aberrant host species, P. tenuis infections are diagnosed post-mortem by identification of adult worms or larvae in nervous system tissues, or potentially by identifying parasite tracts in the brain or spinal cord that could have been caused by them.  Ante-mortem diagnostics are not currently available for these species.

Albendazole, ivermectin, fenbendazole, diethylcarbamazine, levamisole, and moxidectin administered alone or in combination have been reported to successfully treat P. tenuis infection in captive animals. However, controlled studies of the efficacy of such treatment protocols are lacking.

Anti-parasitic treatment is often accompanied by non-steroidal anti-inflammatory or dexamethasone therapy as well as other supportive care. Neurologic damage may be permanent even in treated animals.

Infections can be difficult to prevent in captive animals due to the difficulty in reducing exposure to gastropods. Snails can harbor the larvae for months once infected.

Building fences or other barriers around pastures can help keep deer away, and controlling drainage and breaking up vegetation with gravel roads can discourage snails from getting to pastures.  Administration of an anthelmintic during peak transmission months (late summer, fall) may reduce larval infections. 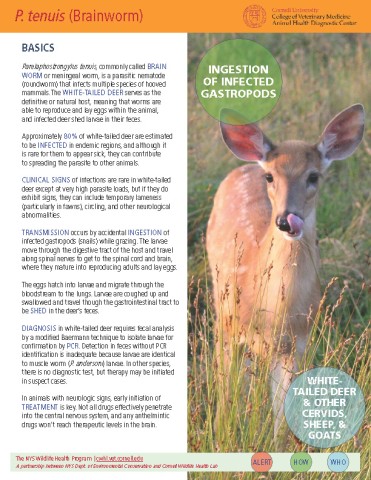