Organophosphates (OPs) and carbamates vary greatly in toxicity, residue levels, and excretion. They are primarily used as pesticides.

Organophosphates are toxic to many species of birds and mammals including pets, farm animals, and wildlife species.

Although the targets are insects, non-target animals can ingest the products from open bait containers or indirectly become exposed by consuming poisoned insects or plant material.

Pets and children are at risk of consuming the pesticide used in the household, and caution should be used when setting household baits to avoid accidental poisoning. They interfere with the action of a brain enzyme that breaks down the neurotransmitter acetylcholine. The effects may last weeks to months from a single exposure.

Organophosphates have a steep dose-response curve and should be handled and used cautiously. Poisoning from these pesticides results in cardinal clinical signs consistent with cholinergic stimulation.

Usually the first to appear are hypersalivation, miosis (constricted pupils), frequent urination, diarrhea, vomiting, colic, and difficulty breathing due to increased bronchial secretions and bronchoconstriction. Some animals may have skeletal muscle tremors and subsequent weakness, loss in coordination and seizures.

Onset of signs after exposure is usually within minutes to hours but may be delayed for >2 days in some cases. Severity and course of intoxication is influenced principally by the dosage and route of exposure.

In acute poisoning, the primary clinical signs may be respiratory distress and collapse followed by death due to respiratory muscle paralysis. In addition to brain and skeletal muscles, OPs are known to adversely affect other organ systems, including the cardiovascular, respiratory, hepatic, reproductive and developmental, and immune systems.

Diagnostic determination of organophosphate poisoning is often accomplished by confirming reduced acetylcholinesterase (AChE) activity in blood or brain. Frozen stomach and rumen contents should be analyzed for the pesticide. Blood/serum, liver, and urine can also be analyzed for residue of OPs or their metabolites.

There are three categories of drugs used to treat organophosphate toxicity. 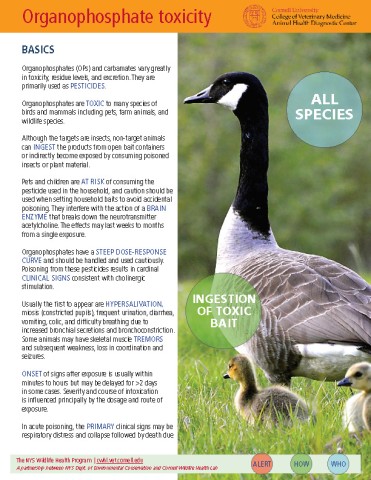