Lead is a heavy metal found in mineral deposits around the world. It has been widely used in many industries including ammunition and fishing tackle. Lead has no biological function and is toxic to all animals.

All animals are susceptible to lead toxicosis, although the effects are most often seen in birds, especially loons and swans, condors, vultures, and eagles. Other bird species, including crows, robins, mourning doves, upland game birds, and domestic poultry, have also been seen with lead toxicosis.

Clinical signs of lead toxicosis in birds include incoordination, weakness, drooped wings, anorexia, reduced activity, and green watery diarrhea. Toxic effects may cause birds to be more vulnerable to predation, trauma, and other diseases. Birds may become emaciated and die within 2-4 weeks of ingesting lead.

The most common route of exposure to lead for birds is through ingestion of spent lead ammunition fragments and fishing tackle.

In live birds, diagnosis of lead toxicosis is made by assessing clinical signs and measuring lead levels in blood. In dead birds, lead levels in liver and kidney can be measured. Radiographs can be used to detect lead fragments in the gastrointestinal tract or tissues of affected animals.

Lead toxicosis can be treated with lead chelating agents and supportive care, although many birds are too severely affected for treatment to be successful. Removal of lead particles in the gastrointestinal tract or tissues of wild species is necessary to prevent continued exposure
to lead.

State wildlife agencies, including NYSDEC, and conservation groups encourage the use of non-lead ammunition and fishing tackle to reduce lead exposure for wildlife. Because lead ammunition fragments upon impact, lead particles can be found in meat processed from hunter-killed animals posing a risk to people eating those meats.

The toxic effects of lead have been known for thousands of years. Regulations prohibiting the use of lead in paint, plumbing, and gasoline have acted to reduce the risk of lead toxicosis in humans. However, lead continues to be used in ammunition and fishing tackle leading to lead toxicosis in wildlife, especially bird species.

The incidence of lead toxicosis in bird species is related to their diet and digestive anatomy and physiology. Waterfowl have very muscular gizzards for grinding plants in their diet and ingest small rocks to facilitate this grinding. Any lead that is ingested is also subject to grinding, leading to its absorption in the gastrointestinal tract and bloodstream.

Although raptors have less muscular gizzards because of their meat diets, they have highly acidic stomach fluids. Ingested food and lead particles spend more time in the stomach than in other birds. Both of these features favor increased digestion and absorption of any ingested lead compared to other species of birds.

Mammals, such as bears, coyotes, and raccoons, that scavenge gut piles of game animals killed with lead ammunition are at risk of lead toxicosis. Domestic ruminants have been seen with lead toxicosis after ingesting lead batteries.

Lead can be taken up by animals through ingestion, inhalation, or skin absorption.

Common loons have been severely affected by lead toxicosis related to ingestion of lead fishing tackle. Loons strike at fish or tackle as they are being reeled in. The birds may also prey upon fish that have ingested fishing tackle and are impeded by trailing lines. Lost tackle may be ingested as grit or mistaken as a prey item.

Scavenging raptors, such as California condors and eagles, may ingest spent lead ammunition fragments in carcasses or offal piles.

Lead accumulates in the environment and is taken up by plants. For decades, mining waste containing lead was discharged into the Coeur d’Alene river system in Idaho. As a result, tundra swans have been severely affected by lead toxicosis as they burrow into the contaminated mud to feed on roots and tubers.

Lead competes with calcium in the body and inhibits enzymes leading to toxic effects in all body systems. Competition of calcium by lead results in neurologic and reproductive effects. Inhibition of the enzyme used in the synthesis of hemoglobin causes anemia in affected animals.

Although there are no safe levels of lead in blood and tissues, suggested diagnostic guidelines for lead concentrations in tissues and blood are typically published by testing laboratories.

Chelation therapy is used to remove lead from the body. A chelating agent, such as EDTA, binds to lead in the body and both are excreted in urine.

The waterfowl lead shot ban in 1991 effectively reduced lead exposure in waterfowl in the US although the use of lead in fishing tackle continues to put waterfowl, especially loons, at risk of lead toxicosis. In addition, spent lead shot still remains in the environment and may be ingested by waterfowl, wading birds, and upland game birds.

Some states, including New York, ban the use of some lead fishing tackle based on size and weight.

Lead ammunition is commonly used for deer hunting and other activities. Solid copper bullets are an alternative, non-toxic ammunition for hunters. If lead ammunition is used, proper disposal of gut piles when field-dressing carcasses is important to limit access by scavenging animals. Covering, burying, or removing gut piles is recommended. Covering offal with snow is not effective, because the gut pile will be exposed as the snow melts.

Each year in the US, 10-20 million animals die from lead toxicosis. In addition to these individual deaths, lead has negatively affected populations of birds, most notably California condors, bald eagles, and common loons. These birds are long-lived with longer times to sexual maturity making them particularly susceptible to the population effects associated with the loss of breeding adults due to lead toxicosis. 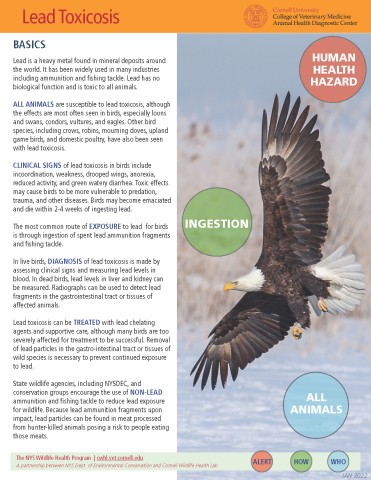