Heartworm is potentially fatal and is caused by the nematode worm Dirofilaria immitis, which primarily affects canids such as domestic dogs, coyotes, foxes, and wolves, but can also cause disease in cats, and ferrets.

Canid hosts infested with D. immitis have clinical signs according to the severity of worm burden and duration of disease. This can cause respiratory and vascular signs including hemolytic anemia, coughing, difficulty breathing, exercise intolerance, ascites, enlarged liver, shock, and can lead to death.

Heartworm is transmitted by mosquito bite from an infected host on to the next host. The adult nematode worms reside in the host’s pulmonary arteries, where they mate and reproduce.

Tests done on serum can detect adult female worm antigen in the blood, and there are no reliable tests for single male worm infections. Recovered adult or developing worms upon necropsy can be identified morphologically or by PCR.

Since it requires mosquito hosts for complete development and transmission, emptying standing water and water in containers at least every 10 days, and treating large containers of water such as bird baths and pools can greatly reduce mosquito bites and potential for disease transmission. Monthly preventive medication kills circulating larvae and can protect domestic animals from infection.

Treatment can be expensive and risky. Adulticide medications can be administered carefully and under observation, and treated animals must be kept under exercise restriction to reduce the risk of circulatory complications due to dead and dying worms.

Heartworm is found in all the 50 states and is a worldwide problem of domestic animals and wildlife.

Adult worms reside in the pulmonary arteries, although heavier infestations or loss of blood pressure at death can cause worms to back up into the right ventricle of the heart. Physical obstruction and damage from infestation can be seen at necropsy.

In aberrant hosts, D. immitis infestations may cause damage from larval migration through the skin, conjunctiva, or other organs. Cats typically suffer from Heartworm Associated Respiratory Disease (HARD), which mimics signs of feline asthma. This disease is caused by the interaction of the feline immune system and infestation by as few as one to three adult worms in the pulmonary arteries.

Gravid female worms release their offspring in the form of microfilariae, the first stage of D. immitis development. Microfilariae circulate in the peripheral vasculature and are ingested when a mosquito bites an infected animal. It must develop in a mosquito for 9 to 16 days before being transmitted by mosquito bite to the next host.

Larvae will continue to develop in the host’s connective tissue and muscles near the site of entry, and will migrate to the pulmonary arteries to complete their maturation into adult worms. Maturation from infection by mosquito bite to adult worms will take 5 to 6 months, after which, in mixed sex infections, the cycle will begin again.

Microfilariae can also be detected in the blood either by direct observation on a slide or by a modified Knott’s test during which larvae are filtered and concentrated out of the blood before fixation and visual screening. Microfilariae must be distinguished from Acanthocheilonema reconditum, a morphologically similar blood parasite of dogs and wildlife. Heartworm infestation in aberrant hosts and cats may not produce microfilariae.

Surgical extraction of adult worms can also be attempted, and care must be taken to not break the worms while doing so.

In domestic animals, the most important method of control is prevention through monthly administration of macrocyclic lactones. 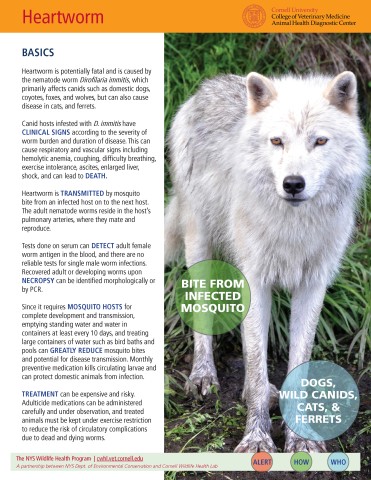