Harmful algal blooms (HABs) are caused by phytoplankton, microscopic plant-like organisms that live in water. Three types of phytoplankton are the cause of most HABs: cyanobacteria, dinoflagellates, and diatoms. Cyanobacteria, more commonly known as blue-green algae, are most often found in fresh water, whereas dinoflagellates and diatoms, commonly known as microalgae or red tide, are seen in salt water.

All these organisms can produce toxins which cause disease or death in many species of animals, including humans. Blooms are often associated with die-offs of fish and animals that eat the fish. Fish, sea turtles, birds, and marine mammals are the most common wildlife species affected by HABs. Domestic animals, including dogs and livestock, can also be affected.

HAB toxins can cause illness or death within minutes to hours of exposure through contact, ingestion, or inhalation.

Clinical signs include skin irritation, rash, difficulty breathing, coughing, wheezing, vomiting, uncoordinated movements, seizures, paralysis, and death. Toxicosis of animals by HABs may be suspected if a bloom is occurring nearby, although animals can be affected through the food web in the absence of an ongoing HAB.

There are no antidotes to toxins produced by HABs. Contact with a HAB is a veterinary emergency. Affected animals should be washed to reduce exposure to toxins. Treatment consists of supportive and symptomatic care.

Harmful algal blooms (HABs) are caused by phytoplankton, microscopic plant-like organisms that live in fresh, brackish, or salt water and can produce toxins.

Cyanobacteria produce microcystins, dinoflagellates produce saxitoxins and brevetoxins, and diatoms produce domoic acid. Saxitoxins are responsible for what is commonly known as paralytic shellfish poisoning. Domoic acid poisoning is known as amnesic shellfish poisoning in humans. These toxins, when contacted, ingested, or inhaled, can cause disease and death in many species of animals, including humans.

HABs can also affect animals by depleting the oxygen content of water or negatively impacting seagrass growth by blocking sunlight.

Outbreaks of toxicosis caused by HABs have been reported in many species of wildlife, including fish, waterbirds, marine mammals, sea turtles, bats, tree frogs, and coyotes.

Fish die-offs may occur due to low oxygen levels in water caused by algal blooms. In addition, fish can be affected by direct exposure to toxins in the water or by consuming prey that contain toxin. Clinical signs in fish include erratic swimming, paralysis, gill failure, and death.

A red tide event in Texas led to the deaths of seven coyotes and a domestic dog, most likely from ingestion of fish that died from the toxin.

Marine wildlife can be affected by red tides. Outbreaks of toxicosis caused by saxitoxins and domoic acid have caused deaths in coastal and shore birds, such as murrelets, cormorants, gulls, puffins, loons, pelicans, and penguins, that eat fish containing the toxin. Clinical signs include compromised ability to fly or swim, difficulty breathing, vomiting, paralysis, and death.

Mass strandings and die-offs of marine mammals, such as dolphins, seals, whales, and manatees, and sea turtles, can be caused by HABs. Marine animals may ingest prey with toxin or inhale toxin when they surface to breathe. Animals, such as manatees and sea turtles, may also suffer indirectly when sea grass beds are damaged by dense algal blooms that block sunlight.

Die-offs of bats have been associated with HABs caused by blue-green algae. Bats may be exposed to toxins through ingestion of contaminated water or insects.

Wind can cause toxins to become aerosolized leading to toxicosis in animals far from the HAB. In 2015, a red tide bloom occurred on the coast of Texas. A rainstorm with high winds and rough waves caused aerosolization of the brevetoxin. More than 30 green tree frogs living half a mile inland from the bloom were found dead; brevetoxin was detected in their tissues. In addition, ground squirrels and a coyote were also affected.

Because it is not possible to tell if an algal bloom is toxic by its appearance, people and their pets should avoid contact with water that is discolored, smells foul, or has mats of algae. Farm animals can be kept away from algal blooms by erecting fences around water bodies. Reducing nutrient levels in water by preventing agricultural and household run-off containing fertilizer and maintaining septic systems is also important. People should heed warnings about HABs in recreational water and avoid eating fish and shellfish.

HABs are becoming more frequent and severe because of warmer water temperatures caused by climate change and increased nutrient content in water due to agricultural and wastewater run-off. Wildlife are often the first animals to be affected by HABs and can act as sentinels to alert people to dangerous blooms. Systems are in place to encourage reports and investigations of potential HABs. The Centers for Disease Control and Prevention runs the One Health Harmful Algal Bloom System to collect information to support the understanding and prevention of HABS and associated illnesses.

In New York, if you suspect that you have seen a HAB, please report it to DEC by submitting a Suspicious Algal Bloom Report Form. 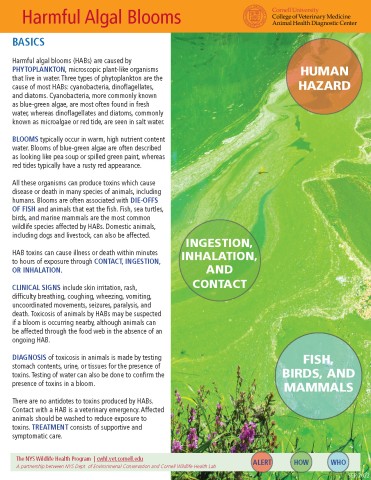