EHD primarily affects white-tailed deer and can cause significant mortality events, particularly in the northern United States. Mule deer and pronghorn antelope are also affected. Neither EHD or BT are a disease of humans.

Clinical signs in white-tailed deer usually begin approximately 7 days after infection with the virus. They may have reduced appetite, weakness, and loss of fear of humans. Fever and edema are common and deer with EHD often have a swollen head, neck, tongue, or eyelids. Deer die quickly within 8 to 36 hours.

EHD is transmitted to an animal host by the Culicoides midges. They are tiny biting flies most commonly known as “no-see-ums” or gnats and are smaller than mosquitoes and other flies.

Diagnosis is based on the combination of clinical signs and virus testing on tissue and blood.  Virus identification is essential since the signs of EHD can resemble BT and other diseases of agricultural concern, such as Foot and Mouth.

There is no treatment for EHD or BT in wildlife populations and no wildlife prevention plan currently exists.

Both EHD and BT are in the genus Orbivirus and family Reoviridae. There are 10 known serotypes (variations) of EHD and 24 serotypes of BT worldwide. Outbreaks of EHD in domestic ruminants are becoming more common.

Both BT and EHD produce lesions on the mouth and feet that also resemble a serious viral disease of livestock called Foot and Mouth Disease (FMD) which is not currently found in the US. BT is similar to EHD but more typically affects domestic ruminants such as sheep, cattle, and goats. It can potentially infect domestic dogs.

These vary based on the serotype of EHD and whether or not animals have any preexisting immunity. The incubation period ranges from about 5 to 10 days.

The acute forms of the disease have high mortality rates. Fever causes deer to seek out water, so that dead deer may be near or in water. Deer with chronic infections may show hoof abnormalities, including sloughing of hoof walls.

The virus damages the endothelium, or the lining of the blood vessels causing small hemorrhages over the body. Hemorrhage of the heart and lungs can result in respiratory distress. There may be dental pad erosion or tongue ulcers as well as bloody discharge from the nasal cavity. Ulcers of the stomach (rumen and omasum) may also be present. The virus causes high mortality in northern deer. In recovered animals, hoof abnormalities can be seen.

In domestic ruminants, such as cattle and sheep, EHD is usually less severe but may cause fever, oral ulcers, and other mild signs.

EHD is transmitted to an animal host by an insect in the Culicoides genus, often called a midge or gnat. A female midge picks up the virus from the blood of an infected host and then transmits the virus by biting another host. 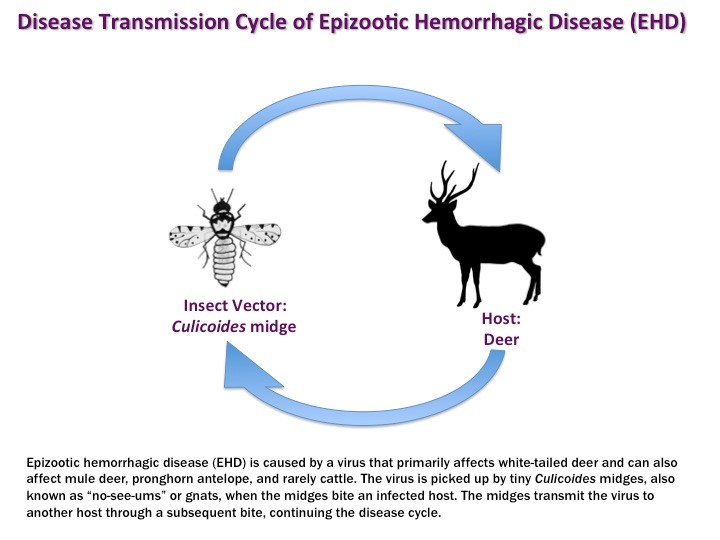 Laboratory tests that can confirm EHD include immunofluorescence and reverse transcriptase polymerase chain reaction (RT-PCR) tests from tissues or blood.

Hemorrhagic disease outbreaks are related to seasonal patterns of vector activity and outbreaks occur in late summer and early fall. The midges and virus are killed within two weeks of the onset of frost which limits the transmission cycle. Although the vector is not found in all areas, it is easily transported to new areas by wind currents.

EHD has circulated in the southern United States for decades and outbreaks in deer there are typically mild or completely inapparent, detectable only by antibody titers. The periodic movement of infected midges in recent years to the northern United States where there is little history of previous exposure results in severe outbreaks with high mortality.

EHD was confirmed in New York State in October 2007 in Albany and Niagara counties. In August 2011 an outbreak of EHD caused an estimated 100 deer mortalities in Rockland County before Hurricane Irene ended the episode.

In the early fall of 2020, another large outbreak occurred in the lower Hudson Valley and killed an estimated 1,500 deer. In 2021, reports of dead deer in New York stated in July. This outbreak resulted in nearly 2,000 reports of dead deer with positive cases of EHD confirmed in 15 counties in the Hudson Valley, the Great Lakes region, and Long Island. EHDV-6 is the serotype of EHD virus that infected deer in New York in 2020 and 2021.

Although New York State does not actively conduct surveillance for the viruses, the NYS Department of Environmental Conservation (DEC) will investigate disease outbreaks.  Sightings of sick or dying deer or groups of dead deer should be reported to the nearest DEC regional wildlife office. NYSDEC provides a list of regional DEC office contacts.

With the help of the Wildlife Health Program, the DEC launched a new online reporting system in 2021 to handle the large number of incoming reports.