Chytridiomycosis is an infectious disease of amphibians caused by the fungus Batrachochytrium dendrobatidis (Bd). It an emerging disease that is significantly impacting amphibian populations across the globe. The disease has caused the decline or complete extinction of over 200 species of frogs and other amphibians.

Chytrid disease is known to affect over 350 species of amphibians, though it appears to be impacting frog species most severely. However, the disease does not have an effect on all frog species.

Bd infects the keratin layer of the skin, where it multiplies by producing zoospores, which are shed into the environment. The zoospores can live for weeks in water depending on the temperature.

Clinical signs vary by species. The earliest signs of chytrid disease tend to be anorexia and lethargy. Most frogs experience excessive shedding of skin, which appears opaque and gray-white or tan in color.

Other common signs include red skin, convulsions, lack of the righting reflex (a reflex that corrects the orientation of the body after it has been taken out of its normal upright position), abnormal feeding behavior, and discoloration near the mouth.

Bd is a waterborne fungus that disperses into the environment in order to search for a new host. The fungus travels through water sources until it finds a new host, and enters through the skin.

It is impractical to treat amphibians in the wild, and the zoospores can be widespread in the environment.  There is no vaccine.

Chytridiomycosis is easily spread by human activity. Boots, clothes, and equipment should be cleaned. Wild amphibians should not be moved between habitats.

Chytrid was first discovered in 1993 in Australia after a massive mortality event involving several species of frog. Further studies conducted on preserved amphibian specimens have shown that Bd has been present in Australia since 1978 and that the disease may have originated in Africa in as early as 1938.

Chytrid disease is believed to be responsible for one of the most significant losses of biodiversity from disease in recorded history.

Currently, the American bullfrog and the African clawed frog appear to be resistant to the disease, but may still act as carriers. The disease is not known to affect humans.

Chytridiomycosis is present on every continent except for Antarctica, though the disease is having the biggest impact in South and Central America, Australia, and North America. In the United States, chytrid disease has been confirmed in 46 out of the 50 states.

In Canada, infection with Bd has been found in various species of frogs from at least 7 provinces and the Northwest territory. The highest incidence of disease is occurring in the Western part of the United States.

Many frogs experience a thickening of the skin, which may prevent oxygen exchange, and impair thermoregulation, nutrient intake, and hydration. Secondary skin infections with bacteria can occur.

Once the host is infected with Bd, chytridiomycosis may or may not develop. The disease is transmitted through contact with zoospores in the environment, and possibly through direct contact with diseased amphibians, though this has not yet been confirmed. Research has shown that Bd grows best in water that is between 17-25°C (62-77°F) and that in the wild, most disease outbreaks occur at higher elevations during cooler months.

Captive animals may be treated for chytridiomycosis with antifungal medications and heat therapy. 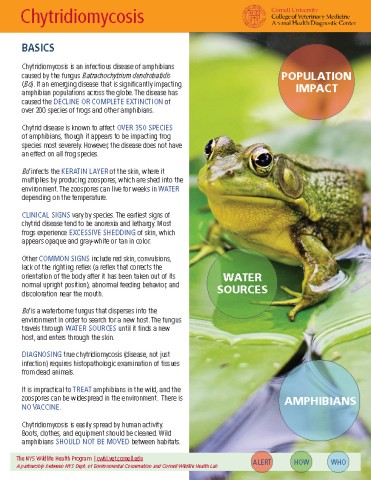