Bovine tuberculosis (bTB) is a bacterial disease caused by Mycobacterium bovis. Many species of wildlife can be infected with M. bovis. Bovine TB is spread primarily from animal to animal via respiratory secretions but can also be spread by the fecal-oral route or by ingestion of contaminated food.

Some species can act as reservoirs of infection for other animals, shedding the bacteria for years with no clinical signs. In some areas of North America, these maintenance species include white-tailed deer, American bison, and elk.

In deer, M. bovis infection typically causes a chronic, progressive disease with most infected deer appearing healthy for years. Over time, infection results in gradual debilitation and emaciation. Other common symptoms in deer surviving to late-stage disease may include weakness, coughing, nasal discharge, and difficulty breathing.

Diagnosis of bTB in wildlife is done by testing lymph nodes and tissues with lesions for the presence of M. bovis.

Transmission can occur by direct contact with tissues and fluids of infected animals, including ingestion of unpasteurized milk and dairy products from infected cows. Direct transmission of M. bovis from infected deer is important to consider because of possible exposure of hunters, trappers, taxidermists, processors, and wildlife biologists.

Bovine TB is a zoonotic disease and can be transmitted from animals to humans.

There is no treatment for bTB in wildlife.

Bovine tuberculosis is found around the world in various wildlife species. Maintenance, or reservoir, hosts include the brush-tailed possum in New Zealand, the European badger in the United Kingdom, European wild boar in Spain, and Cape buffalo and antelope in southern Africa. In areas of North America, white-tailed deer, American bison, and elk are maintenance hosts.

Other wildlife species are considered to be “spillover” hosts; that is, they can become infected, but the pathogen does not persist in a population without recurring introductions from other species.  Spillover hosts in North America include raccoons, opossums,
fox, wolves, and black bears.

Transmission occurs more often when animals are in high density, such as at bait, mineral, or supplemental feeding sites. Indirect contact among animals at shared feeding sites or stored feed is believed to be the primary transmission route between infected wildlife and cattle, as feed or mineral licks become contaminated with infectious saliva, urine, and feces.

Transmission of M. bovis to carnivores, such as coyotes, badgers, and raccoons, can occur during scavenging of infected carcasses or by consuming contaminated feed.

Lesions associated with bTB infection in wildlife include white, yellow, or tan pus-filled nodules on the inner surface of the ribcage, or the surface or interior of the lungs, or inside lymph nodes and tonsils. The medial retropharyngeal lymph nodes and tonsils are the most common sites for lesions in cervids. Hunters may see these nodules during field dressing of deer carcasses.

Special stains can be applied to tissues to identify the acid-fast rods under the microscope.  Cultures of the bacteria grown from infected tissues are then used to distinguish M. bovis from other types of Mycobacteria, such as M. tuberculosis and M. avium.

Bovine tuberculosis in cattle herds has important economic consequences and is monitored by the USDA through skin testing of herds, surveillance at slaughter facilities, and tracking movement of animals between herds. Because M. bovis infections in wildlife can exist undetected for years or decades, surveillance is important, particularly in regions where M. bovis has been historically identified.

Although there is no treatment for bTB in wildlife, vaccines are being developed to control the disease in some wildlife species, including the brush-tailed possum and European badgers, in order to decrease the risk of transmission to cattle. For wild deer, the most effective management option is to reduce the density of deer in a management zone which can be achieved through hunting.

In humans, the infection is treated with a combination of several antibiotics that are also used to treat the more common infection caused by a related bacteria, M. tuberculosis. 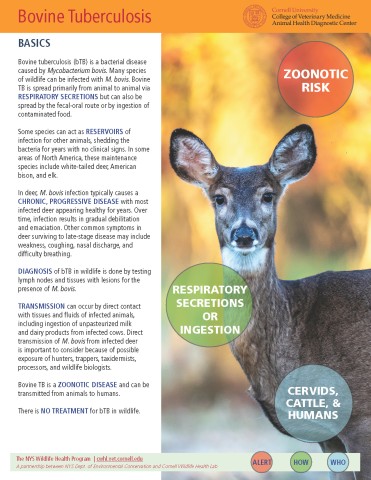