Botulism is caused by a toxin produced by Clostridium botulinum bacteria. Animals can become sick by ingesting the toxin, or the bacteria which produce the toxin. C. botulinum produces spores that are heat resistant and exist widely in the environment.

Around 10,000–50,000 birds are lost in most years, with losses reaching 1 million or more during the great outbreaks in the western USA. Most affected birds are ducks, although loons, geese, and gulls also are susceptible. Dogs, cats, and pigs are comparatively resistant to all types of botulinum toxin.

Clinical signs include progressive weakness and flaccid paralysis of skeletal muscle. In birds, it causes weak flight. Death is usually due to respiratory or cardiac paralysis.

Transmission occurs when C. botulinum or the toxin in the environment or prey item is ingested. Type C is common in waterfowl in late summer, while Type E impacts birds on the Great Lakes in the fall. The spores produced by the bacterium are highly resistant and are prevalent in soil, river, and seawater. It may also occur via the carcass-maggot cycle. Fly larvae, as they feed on the carcasses, accumulate the toxin in their systems (being relatively asymptomatic) and are a common prey species for many animals and thus distribute the toxin up the food chain.

It is difficult to establish the diagnosis but isolating the toxin from animal tissues or serum or in the suspect feed is recommended for confirmation.

Treatment using antitoxin has varying degrees of success, depending on the type of toxin involved and the species of host. Treatment of ducks and mink with type C antitoxin is often successful.

In an anaerobic environment, the spores germinate which grow and produce the toxin. There are seven distinct forms of botulinum toxin, A-G. Four of these (A, B, E, and F) cause disease in humans. C, D, and E cause botulism in other mammals, birds, and fish. C is the most common among animal species, notably wild ducks and geese, pheasants, chickens, mink, cattle, and horses; and D in cattle.

Type C botulism outbreaks in birds occur during the summer and fall when ambient temperatures are highest. As the toxin accumulates in the soil and in decaying plant matter in marshes, foraging water-birds will subsequently ingest the botulism toxins and spores.

During the fall, Type E botulinum is a common cause of mortality in loons and ducks on the Great Lakes. Transmission is due to consumption of invasive goby fish. Gobies feed on the decaying material on the lake bottom, ingesting Type E toxin which then affects the birds. Botulinum spores also germinate in the gut of stressed or morbid fish, especially during the summer when toxin production is increased. Upon death, the resulting anaerobic environment and rich protein source of carcasses is optimal for spore germination, continuing the cycle

The spores produced by the bacterium are highly resistant and are prevalent in soil, river, and seawater. The usual source of the toxin is decaying carcasses or vegetable materials such as decaying grass, hay, grain, or spoiled silage.

Botulinum toxins interfere with transmission of signals in the nervous system, specifically in cholinergic nerves. The rate at which clinical signs develop depends on the quantity and type of toxin consumed and species affected.

Birds develop progressive weakness, inability to fly, and in severe cases, inability to breathe. Many birds will have paralysis of the third eyelid which will partially cover the eye. 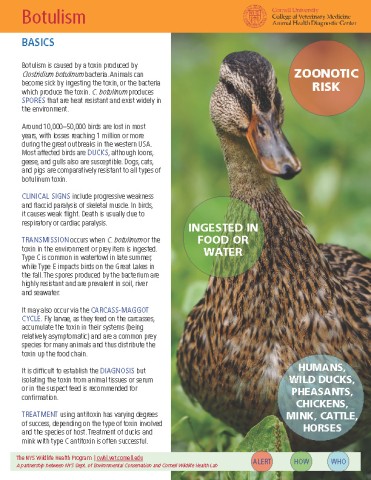