Avian reoviruses (ARVs) are double-stranded RNA viruses of the family Reoviridae, genus Orthoreovirus, that can infect both domestic and wild birds. In crows, the ARV called corvid orthoreovirus causes a disease known as winter mortality of crows in which large numbers of crows become infected and die as they congregate in winter roosts.

Winter mortality of crows was first identified in 2001 and has been seen over a broad range of North America and in parts of Europe.

Crows infected with corvid orthoreovirus are typically found dead. On gross and histologic examination, birds show severe inflammation and necrosis of the intestines and colon, spleen, and sometimes the liver.

Most die-offs due to corvid orthoreovirus occur in winter months when large numbers of crows congregate at winter roosts. Overcrowded conditions lead to increased fecal-oral transmission of the virus. Hundreds of crows may be infected and die.

Diagnosis of ARV infection is made by isolation of the virus from affected tissues and/or PCR tests. An in-situ hybridization probe has been developed to demonstrate the presence of corvid orthoreovirus in tissues.

There is no treatment for ARV infections.

ARVs are relatively resistant outside the host and may survive on feathers, wood shavings, metal, and glass for up to ten days. ARVs can survive in water for longer periods of time. Vaccines to control ARV infections are available for domestic poultry.

The name “reo” stands for “respiratory enteric orphan” indicating that some of these viruses are not associated with known diseases. However, since their naming, avian reoviruses have been shown to cause a variety of diseases in domestic and wild birds.

ARVs have been isolated from a variety of wild bird species. ARVs related to corvid orthoreovirus have been linked to deaths of other corvid species: the hooded crow in Finland, magpie in England, and carrion crow in Belgium.

Other ARVs have been isolated from wild birds, including storks, herons, buzzards, and pigeons, with no signs of disease.

An ARV was isolated from woodcocks found dead in New Jersey and Virginia in the winters of the early 1990s. These birds were emaciated but had no obvious gross abnormalities, unlike crows with winter mortality. However, the infection appeared to be systemic, because the virus was isolated from several different tissues.

ARVs are widespread and typically do not cause disease in poultry. However, they can cause inflammation of joints and tendons leading to lameness, especially in meat birds, as well as malabsorption syndrome, inflammation of the
heart, pneumonia, and runting.

It is possible that strains of ARV are transmissible between different bird species. However, it is unknown if wild birds act as reservoirs of infection for domestic poultry.

Avian reoviruses do not infect humans or other mammals. 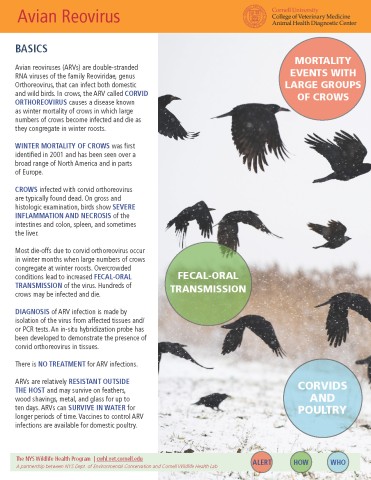