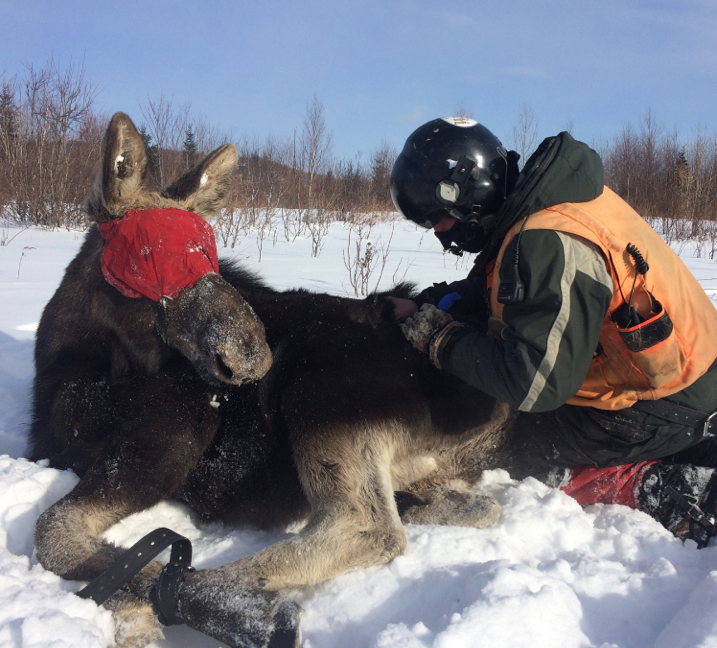 Schuler was also part of last week’s “moose mugging” crew.  From a helicopter, two “muggers” locate, and then either shoot a net over the moose or use chemicals to immobilize it. They then handle the animals, putting tracking collars on the moose and collecting the samples for the scientists who are on site to process the blood, feces, parasites, and tissues gathered from the animals. Schuler, along with wildlife veterinarians Drs. Jeanne Ross and Nina Schoch, and Cornell wildlife health research aide, Niki Dean, process the samples. The Cornell Wildlife Health Lab screens them for a variety of infectious diseases and health indicators. 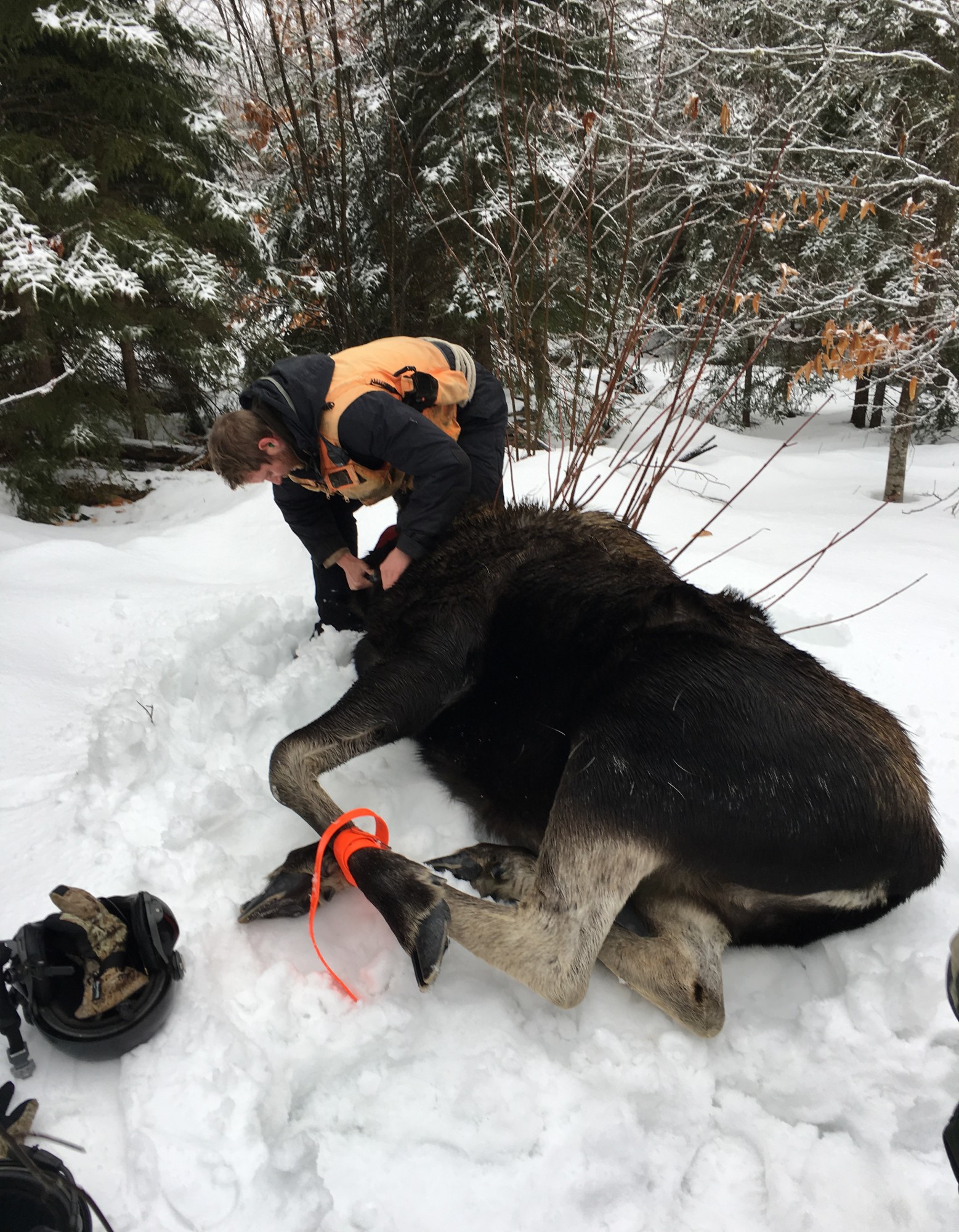 So far, in 2017, five female moose have been darted from a helicopter, marked, and collared, including the ones captured last week. They will be monitored along with moose collared in 2015 and 2016. These cow moose are tracked by satellites that download their locations daily. If any of these monitored moose die, their collar sends a special mortality signal so the carcass can be located. To date, over 100 moose carcasses have been examined, and have  yielded vital information to wildlife biologists—for example, the major sources of mortality are trauma and parasites—the most problematic ones being the deer brainworm (Parelaphostrongylus tenuis) and giant liver fluke (Fascioloides magna).

The broad goal of this project is to determine how many moose are in New York, along with factors that may impact the population’s viability--such as habitat carrying capacity and diseases.  “Fortunately, moose in New York generally appear healthy, and are not suffering from winter tick infestation as some populations in the Northeast and other states,” says Dr. Krysten Schuler, a wildlife disease ecologist with the Department of Population Medicine and Diagnostic Sciences who has been examining moose health as part of the Cornell Wildlife Health Lab’s work with the NYSDEC. 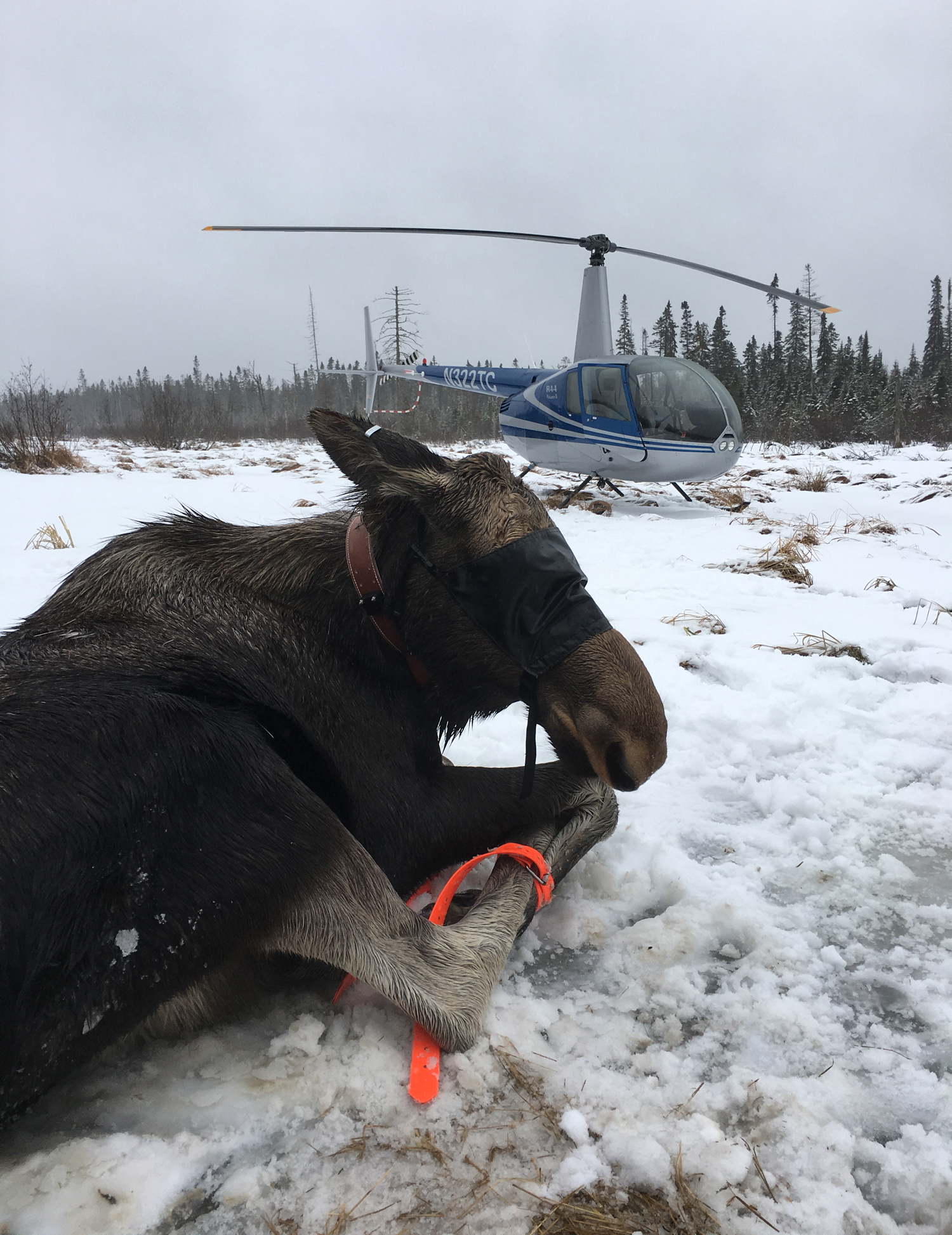 The Cornell Wildlife Health Lab is working with a variety of institutions to determine and assess the New York moose population. These include the NYSDEC, SUNY-Environmental Science and Forestry, New York Cooperative Fish and Wildlife Research Unit, Wildlife Conservation Society, and Biodiversity Research Institute. To learn more about the project, visit: http://ny-moose.weebly.com/

Watch a video of the "moose mugging" helicopter.