A DEC Environmental Conservation Office collected a white-tailed deer carcass after it was found dead in a pond by the homeowner in Orleans County on 10/13.  He also noted that other deer had been seen swimming in the pond. Quick collection and proper handling of the animal by ECOs and NYS Wildlife Health Program staff at Cornell using appropriate PPE was strictly followed and essential when handling wildlife as it may be infected with rabies or other infectious diseases. The brain sample was removed and sent to NYS Wadsworth lab for testing and was reported positive for rabies.

A white-tailed buck was euthanized in Cortland Country on October 1 by a DEC Environmental Conservation Officer after it was found "circling in a yard, " it "appeared thin," and was approachable by humans. Appearing tame or being approachable, anorexia, and incoordination or restlessness are some of the clinical signs of rabies. The deer was submitted to the NYS Wildlife Health Program at Cornell and a sample of the brain was sent to the Wadsworth Lab for rabies testing and this deer was confirmed positive for rabies on October 9.

Reports of a deer found "swimming weakly in a small pond" by concerned property owners in Ontario County led to follow-up by the DEC. An Environmental Conservation Officer euthanized the deer which was submitted to the NYS Wildlife Health Program at Cornell on October 2. A sample of the brain was sent to the NYS Dept. of Health - Wadsworth Lab for rabies testing and this deer was positive for rabies.

Hunting season is about to begin across New York. It’s important for hunters to remember that all mammals, including white-tailed deer, are susceptible to rabies. This week, a white-tailed deer in Cayuga County was reported as “thrashing around and unable to get to its feet.” No apparent injuries were observed. A NYS Dept. of Environmental Conservation Officer euthanized the deer and submitted it to the NYS Wildlife Health Program at Cornell. A sample of the brain was sent to the NYS Dept. of Health - Wadsworth Lab for rabies testing. This deer was positive for rabies. Rabies can cause neurologic signs, which can include balance problems, aggressiveness, lack of fear, and incoordination. Rabies is a zoonotic disease, meaning that it can be transmitted from animals to people. Fortunately, all people handling the deer were wearing personal protective equipment (PPE) in the form of gloves.

Remember to include disposable gloves in your hunting gear as you head into the field. Wear gloves when field dressing or butchering your harvest and be sure to discard the gloves in the trash. Wash your hands with soap and water when you are finished. Rabies virus can be transmitted through the animal’s saliva and blood into an open wound. Do not consume animals that appear abnormal. To report neurologic deer, please contact your DEC Regional Wildlife Office. For more info on rabies signs please visit the links below. 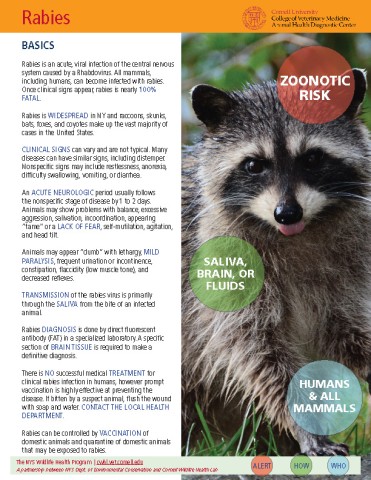