Since late November 2021, numerous outbreaks of Highly Pathogenic Avian Influenza (HPAI) have been detected in the United States and Canada in both wild and domestic birds. Avian influenza (AI) is caused by an influenza type A virus, which is carried by free flying wild birds such as ducks, geese, gulls, and shore birds. Generally, influenza viruses can infect some wild species without causing signs of disease, but new strains can emerge that cause illness with high mortality in both wild birds and domestic poultry. These are designated as HPAI.

This HPAI strain is type H5N1 2.3.4.4.b, and likely came from Europe where it has been circulating since 2020-2021. The start to this outbreak has been a “slow burn” with rapid expansion of cases in mid-March. As of 17 March 2022, there were 376 detections in 23 states in both wild birds and poultry; all 4 flyways have had detections in a variety of species.

The primary source of surveillance in the U.S. is USDA-Wildlife Services, which expanded their planned surveillance from Atlantic and Pacific flyways to also sample the Mississippi and Central flyways. The Atlantic flyway surveillance was successful because HPAI was detected in wild birds before poultry cases appeared. Confirmed cases are listed on the USDA website and shown on the USGS map. 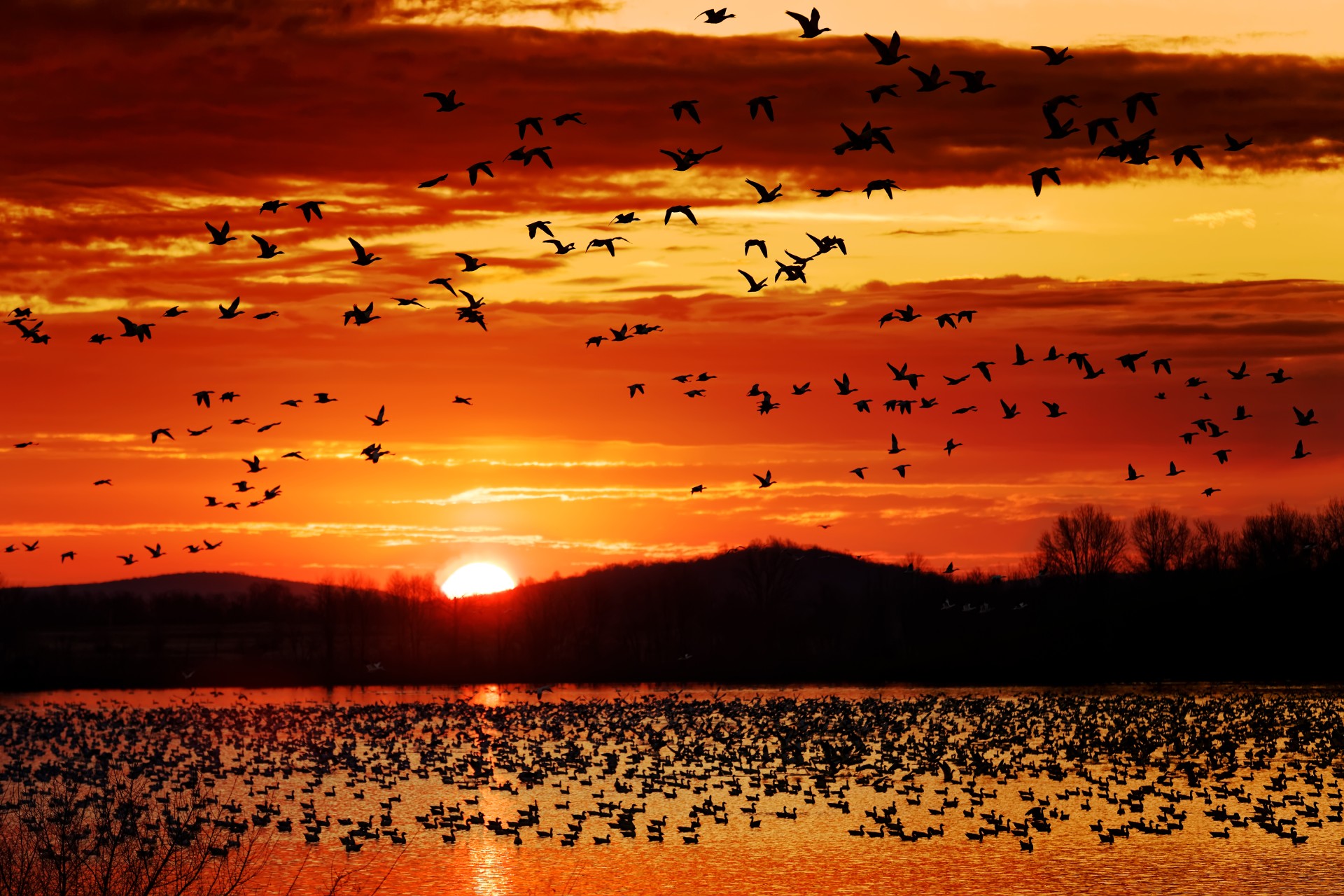 Thousands of migrating Snow Geese fly from a lake in Lancaster County, PA

When transmitted to domestic poultry (chickens, turkeys, pheasants, quail, ducks, geese, and guinea fowl), HPAI can spread rapidly between facilities when there is poor biosecurity for human and vehicle traffic. Typical symptoms include diarrhea, discharge from the nose, coughing and sneezing, and incoordination, but many birds may show no symptoms before death. States with HPAI are prohibited from exporting any poultry products and infected farms are depopulated rapidly to contain the disease.

Status of HPAI in New York

Cases in New York were first confirmed in February 2022 in Suffolk County and are continuing in backyard poultry, rehabilitation facilities, shooting preserve/game bird breeder facilities, zoos, and free-ranging wild birds around the state. The USDA and NYS Department of Agriculture and Markets will be leading the disease response in infected domestic birds (including captive gamebirds), but there is no way to contain the infection in wild birds other than to remove bird carcasses that have succumbed to HPAI. Poultry and gamebird facilities, rehabilitators, falconers, and backyard flock owners have been advised to increase biosecurity measures to prevent transmission. Falconers should avoid having their birds consume any at-risk species including waterfowl and shore birds. At this point, we should assume HPAI can show up anywhere in New York.

DEC’s Reynolds Game Farm works closely with Cornell University on biosecurity issues and they have been in consult during the recent HPAI outbreak. The game farm is enrolled in USDA APHIS Veterinary Service’s National Poultry Improvement Plan (NPIP) program, and as a part of that they receive AI testing regularly.  Staff visiting the farm should follow all biosecurity protocols. If you keep backyard poultry or other birds you should change clothing and shoes, shower, and disinfect any equipment used before visiting. The same precautions should be taken between visiting the farm and returning home.

Although the virus is mostly spread by waterfowl, many species of ducks, geese, swans, shorebirds, gulls, raptors, herons/cranes, and scavengers like bald eagles, crows, and vultures can succumb quickly to infection. In our efforts to keep track of wildlife HPAI cases and provide an early warning to NYSDAM and local poultry or gamebird operations, we would like to examine any unusual mortalities of the species listed above. Passerines do not seem susceptible to HPAI and are not thought to play a significant role in spreading this virus. We are not recommending removal of bird feeders at this point.

​Risk of HPAI infection for humans:

The Centers for Disease Control (CDC) states that the health risk from this strain of bird flu virus is low, “however some people may have job-related or recreational exposures to birds that put them at higher risk of infection.” Follow the above precautions when handling wild birds, particularly waterfowl, gulls and raptors, to reduce your risk. Consider receiving seasonal influenza vaccines. Monitor your health for any signs of flu-like symptoms within a week of handling wild birds and consult your health care provider if you have any questions.